Posted by Keith Spillett in General Weirdness on August 12, 2013 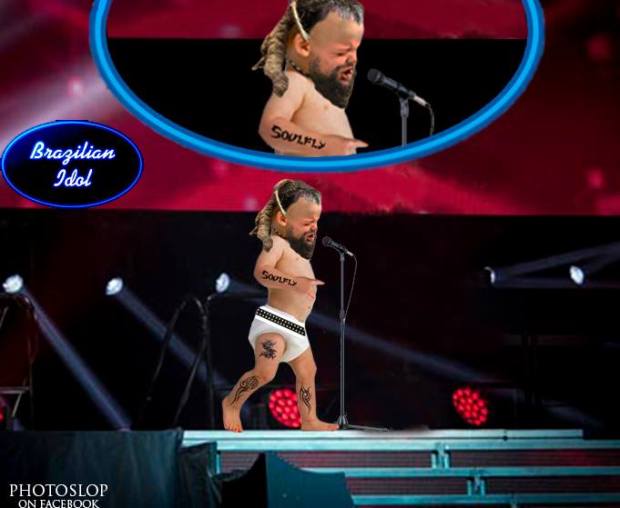 A clip from last Wednesday’s episode of Brazil’s top prime time television program “Brazilian Idol”, known to the people as Placa De Ferver Infestados Rins, has become an Internet phenomenon thanks to the amazing performance of Aldo Infante.

Aldo is an 8-month-old whose voice sounds remarkably like Max Cavalera, the former singer of Sepultura and Soulfly.  The child sent the capacity crowd into hysterics by performing a spot-on cover of the Sepultura classic “Slaves of Pain” and then going into a stirring rendition of “Troops of Doom”.

This was a great moment for a nation that has experienced terrible turmoil for almost 30 years.  Ever since U.S. President Ronald Reagan sent swarms of bee people to the nation in 1986 in order to root our members of the Brazilian Communist Party (Os Desviantes) and ended up accidently killing 2/3s of the population, Brazil has been a country racked with sorrow.

“To see a baby, which only years ago would have been used for food by an undernourished population forced to survive in underground caves because of the swarms of killer Beemen stalking their every move, is a great thing for the Brazilian people,” said President Juan Ponce Gatuno.

While the Beepeople have mostly vanished or been killed off, the 2003 invasion of Brazil by The Robot Overlords from Paraguay has been yet another setback in the Brazilian people’s quest for a life above ground.  Many Brazilians were so moved by Aldo’s performance they have begun calling him “Salvador” (The Savior) and are talking about him as being a potential leader in a revolution against the bloodthirsty robot killing machines.

Singer and actress Peggy Lee, who moved to Brazil after her death in 2002, is currently a judge on “Brazilian Idol”.  She was so moved by Aldo’s performance that she ran onstage, sat in the lotus position and immolated herself in front of the cheering crowd.  Although she has burns over 98 percent of her body and currently lacks the ability to speak or breathe, she is expected to return to the show next week.

Responses from around the world to little Aldo’s Sepultura covers have been extremely favorable.  The clip has received over 15 million hits on YouTube and was the lead news item on the nightly broadcast of the BBC for the 3,000 or so Englishmen who survived The Great English Bloodfeast of 2009.

Americans, who have been mostly unharmed by the plagues, famines and alien attacks that have decimated most of the world, particularly love little Aldo.  According to Courtney Thirstwood, who lives in a gated community in Colorado, “OMG…..It is sooooooo amazing!  The baby sings heavy metal!  That’s soooo 80s!!!!  And it’s cute!  And cute things are fun to look at! Cause they’re cute!”

Posted by Keith Spillett in The Poetry of Death on April 9, 2013 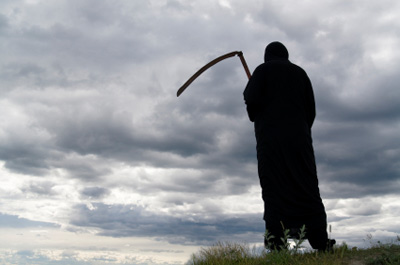 Some guy, who was in a band that influenced a lot of other bands, passed away at 3 o’clock this morning from a disease that some other band was named after.  In a mass, spontaneous outpouring of sadness, thousands of anguished metalheads today posted R.I.P. on their Facebook pages along with pictures and videos mourning the death of a moderately talented, long-haired stranger.

“I can’t believe what’s-his-name is really dead. This is the saddest day since the other guy died a while back,” said some highly emotive gloom-monger who downloaded most of the band’s material off of Limewire.

“This is a great loss for the world of music.  Metal will never be the same,” said some dude who claims his band once opened for a band who opened for Metallica.

The dead guy’s band, which had recently traveled around the country and played a series of uninspiring concerts in front of people waiting for someone else to play, will try to soldier on without him.  In spite of their sadness about his death they have been somewhat consoled by a 15 percent spike in Youtube traffic, not to mention the exciting marketing opportunities that only the sudden, horrific death of an artist can provide.  Several tribute albums featuring obscure musicians looking to rip the remaining flesh off of his corpse should be available soon as people race to cash in on the public’s fetishization of grief.

Sure, his family will probably miss him and the two or three people who actually liked him and thought of him as more than a connection to the rockstar lifestyle are filled with sorrow.  But, at the end of the day, his death was probably a good thing.  After all, it provided thousands of individuals with the opportunity to share in yet another in a never-ending series of public events meant to distract people from issues that actually affect them.  Plus, many will now be able to participate in the fantasy that by exhibiting sorrow on a Facebook status, they can fool people into thinking that they are creatures still capable of experiencing human emotion.

Of course, it is quite possible that his death is actually just some sick prank to gather attention to websites like this one, which traffic in confusion as some bizarre postmodern form of currency.  Or, it could be part of an elaborate hoax used to allow the artist to escape from the rigors of a life of in the spotlight.  Like Elvis.  Or Kennedy.

One thing is certain, death is a valuable and coveted commodity.  If scientists could find a way to allow humans to die multiple times, it would be a marketing bonanza.  To misquote a great line from Clint Eastwood in The Outlaw Josey Wales, “Dying might be a heck of a way to make a living.”

Posted by Keith Spillett in General Weirdness on April 28, 2011 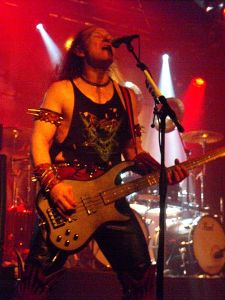 There is one Brit who is still waiting for his invitation to tomorrow’s wedding between Prince William and Kate Middleton.  Cronos (Conrad Lant), the bass player and singer from the band Venom, has checked his mailbox everyday patiently waiting for a message that may never come.  Why would the lead singer of a band that recorded songs like “Sons of Satan” expect an invite to one of the most sacred and important events in Britain this century?  Cronos is, in fact, Kate Middleton’s uncle.

As hard as this may be to believe for many metalheads, Cronos is the brother of Kate’s mom Mary Lant.  In an exclusive interview with The Tyranny of Tradition, Cronos revealed that he had a close relationship with Kate from the time she was a baby.  “We were on tour supporting the Welcome to Hell album when I got the call.   Little Katy was about to be born.  The band and I cancelled the show and rushed to the hospital.  I’ll never forget when I held her for the first time.  Abaddon and I broke down in tears.  It was beautiful,” recalled Cronos.

Cronos was always a big part of the future princesses life.  She grew up going to Venom concerts and was even in the studio when the band recorded their third album “At War With Satan”.  “Mantas had this great idea to have her voice mixed into the background of the song “Aaaaaarrghh” but it we were never able to get it to sound right.”

As Kate got older she got more involved with the band.  “She started playing drums at age 7 and even sat in with us a few times during concerts.  She played Buried Alive with us at a show in Coventry back during the reunion in 1995 and was amazing.  She reminded me a lot of Dave Lombardo.”

When the royal couple first started dating Kate promised Cronos that they might play at the wedding if the two ever decided to tie the knot.  “She had this whole idea about us playing Countess Bathory during the part of the service where she walked up to the altar.  I thought it was crazy, but she kept bringing the idea up. I’d have been honored to play her wedding.”

Cronos was in touch with Kate as recently as seven months ago, but since the wedding announcement she has not returned any of his phone calls.  “She used to call me her favorite uncle.  She loved singing songs with me when she was a little girl.  We used to sing the song “Black Metal” together.  She loved doing the growling part at the end.  Now she won’t even talk to me.”

There have been few mentions of Cronos’ relationship with Kate in the British press.  He believes the royal family has conspired to keep the Kate Middleton/Venom connection out of the media.  “There used to be video of her playing with us up on YouTube, but that was mysteriously taken down months ago.  I feel like they are embarrassed by my career as one of the founding fathers of Satan influenced thrash metal.  I’m not trying to get famous out of this or make money.  I just want my Little Katy back.”