Posted by Keith Spillett in General Weirdness on May 21, 2012

Ward Allegedly Used To Be Between Roosevelt and Lincoln

In a move aimed at making Americans forget the achievements and contributions of former Black Sabbath drummer Bill Ward, President Barack Obama has taken the unique step of having his likeness removed from Mount Rushmore.  Ward had been on the monument between Roosevelt and Lincoln since 1978.

The de-Wardization of Mount Rushmore comes at the end of a traumatic week for Ward, who has seen his image removed from the moon landing picture, the painting of Washington crossing the Potomac and even the website of his former bandmates Black Sabbath.  Ward has remained mostly silent on the matter, but many insiders believe that there is an ongoing conspiracy in place to make the American public forget that Bill Ward ever existed.

However, if you asked most Americans, they wouldn’t even know these significant events had taken place.  A few might remember he was the drummer from Black Sabbath and little else.

Obama’s decision to wipe out the final link to Ward runs deeper than most people even know.  The Obama administration has taken the rare step of removing all mentions of Ward from history as well as any pictures or paintings.  They have even gone so far as to remove him from his own baby pictures.

When asked for comment about the matter in a press conference on Friday Obama remarked “Bill Who?  I’m not aware of the person you are speaking of.  Wasn’t he a drummer or something?”

Black Sabbath have also denied knowledge of the existence of Ward.  Their official website now claims that Vinny Appice played drums on all of their early records.  Singer Ozzy Osboune claims he knew an auto mechanic named Bob Ward once back in Yorkshire, but hasn’t spoken to him in 30 years.  The rest of the band have denied even knowing that a person with the last name Ward has ever walked the earth.

No one seems to know why Ward’s existence is being hidden from the human race.  It is impossible to get an answer from anyone because the minute Ward’s name is mentioned, people who should have known him for years pretend they don’t know what you are talking about.  Even his children now deny he existed.

The sudden disappearance of Ward’s image has led many to speculate that sinister plans are being made to completely eliminate Ward from the minds of people.  Known conspiracy theorist and Ron Paul for President National Spokesman Art Bremer claims that the U.S. government is currently in development of a biological weapon that, once released, will wipe out all memory of Bill Ward.

Update:  I wrote this article last night, but for some reason I can’t remember who this “Bill Ward” person is.   I fell asleep at my keyboard and woke up with some strange story about a guy I’ve never heard of and all of his amazing achievements along with a terrible headache.  I think he might have been a character I made up or something like that.  Everyone knows that Vinny Appice was Black Sabbath’s first drummer and Benjamin Harrison was America’s 23rdPresident.

Posted by Keith Spillett in Pointless Music Reviews on May 14, 2012 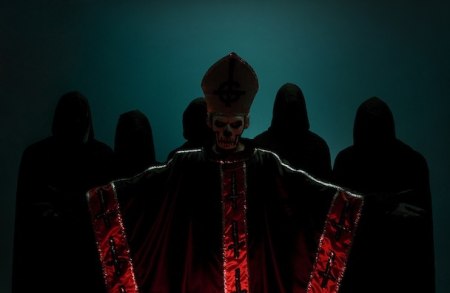 A wise man once told me not to pay for what you can get for free.  He’s currently doing a stretch of 2 to 5 years at Rikers Island for passing bad checks, but his point was well taken.  After my ticket for Saturday night’s Ghost, Opeth, Mastodon show at The Masquearde in balmy Atlanta, Georgia fell through, I was faced with two possible futures.  One involved me jumping in my car, heading over to The Varsity and drowing my sorrows in 12 pimento cheese sandwiches and the other involved me standing out in the parking lot and craning my neck around some light poles to get a glimpse of Ghost, the current greatest band in the history of the universe.  The choice was obvious.

By the time I got to a spot that allowed me to view 1/12th of the stage, they had already launched into a rip-roaring version of their Mercyful Fate tinged masterpiece “Elizabeth”.  Apparently, I was not the only person leery of actually paying to see a concert.  There were two 15-year-olds staring over the fence with expressions of cold, awe-struck horror.   One of them had his “throwback” Bullet For My Valentine “Scream, Aim, Fire” shirt on and the other one looked like he was dressed for the eventual random onset of a golf match.  They clearly were in the wrong place:

Metal Kid #1:  Why is the singer of Mastodon wearing a Pope hat?

Me:  They are completely crazy.  Keep watching.  You’ll see some terrible things.

Me:  Well, first of all, you know where he got that hat from?

Me:  He stole it from the real Pope.

Me:  Oh yeah.  These guys are pure evil.  The drummer punched the Pope one time at an IKEA in Munich and the singer took the hat and ran.  They mugged the Pope for Godsakes! They were supposed to play America a year ago but they were banned from the United States.

Me:  They are into trafficking and selling animal organs.    The singer got caught trying to sneak 150 sheep livers into his suitcase when they went through customs.  It was a big international incident.  That and the whole thing with the walrus got them into a bunch of trouble….

Me:  Jesus, doesn’t anyone read the newspaper anymore!!!!  They did a concert in Poland and at the end of the show they brought a walrus on stage and beat it to death with hammers.  They cut it up and gave pieces to everyone in the audience.  It was unbelievable.  They put birthday candles in each of the pieces!  People ate it completely raw and something like 46 people died of food poisoning.  Horrible!  That’s what got them on the FBI’s 12 Most Wanted List.

Metal Kid #1:  Do you think they’ll kill a walrus tonight?

Me:  God no!  They found religion and recently became Jehovah’s Witnesses.  They swore off all of that praising Satan and slaughtering animal stuff and now they go door to door preaching The Word.  The guitarist, the one dressed like a Jawa from Star Wars, he sold me a copy of Watchtower magazine last month.

I quickly tired of filling the minds of these kids with insidious poison and began to focus my attention onto the mellifluous tones of Ghost.  The solo from Ritual was casacading to its nearly perfect peak when I became aware of a terrible presence only inches from my right arm.  As the song ended, I turned and came face to face with The Hipster With the Glass Eye.

The fella was probably six foot three and 98 pounds soaking wet.  Imagine your average beardo coffee shop barista decked out in his best Piggly Wiggly tee-shirt and you’ve basically got a mental image of the dude I was looking at.  Except this person had a glass eye.  I couldn’t stop thinking about it.  Did he have some terrible accident Vespa racing?  Was this some kind of sadistic, post-ironic fashion statement?  Did he pull the original eye out in frustration when he couldn’t find a copy of the new Band of Horses album?  Do they sell glass eyes at Urban Outfitters now?  This rare specimen of humanity had my interest for a full two minutes worth of conversation.  Then, things got ugly.

Me:  Nobody knows who Ghost is.  They’ve only done two interviews.  Both of them were in caves.  The interviewers were blindfolded and driven hours away to a secure location.  They did the interviews wearing hoods!

Hipster With The Glass Eye:  So, no one knows who they are?

Hipster With The Glass Eye:  (excitedly) Wow, so they are kinda like Banksy???  That’s awesome!

I looked away and shook my head in horror.  An uncomfortable, awkward silence fell over us both.  He stood there waiting for a response that would never come.  I decided that the night was officially over.  I walked to my car filled with hopelessness and despair.  At least the band was good.

Posted by Keith Spillett in General Weirdness on May 3, 2012 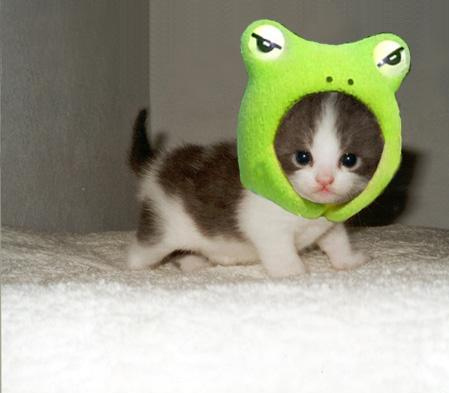 As of midnight on May 4th, 2015, Georgia will become the first state to formally ban cute pictures of kittens from the popular website Facebook.  The move comes in response to a deluge of pictures of kittens in sinks, kittens wearing Darth Vader masks and kittens doing activities typically done by human beings like water skiing or juggling.  In a poll of Georgia voters, kittens on the internet ranked third behind the economy and the threat of poor people receiving adequate medical care as issues that threatened the future of America.  Governor Nathan Deal said yesterday in a press conference that “kitten picture crime might well represent the greatest threat to an efficient and democratic society since baby ducks.”

According to a recent study, 2/3s of the traffic on Facebook is believed to be adorable pictures of kittens.  Republican Representative David Wayne from Hiram, Georgia was fed up and introduced legislation last year to ban these offensive images.  According to Wayne, kitten pictures cause people to become “distracted and less productive” around the office.  Wayne estimates that kitten related work slacking costs the state over 1 billion dollars in revenues on a weekly basis as people waste hours of time giggling and showing their friends all the funny things that tiny cats can do.

While these pictures seem harmless to many people, many critics, including syndicated conservative talk show host Mike Howe, have speculated that pictures of baby cats could be a way for Al-Queda to communicate with sleeper terrorist cells throughout the country.  “Some people think a kitten rolling around in a pile of string is hysterical,” said Howe during yesterday afternoon’s show, “they laugh and laugh and laugh.  Ha. Ha. Ha.  Meanwhile, instructions are being given to groups of terrorists to release biological weapons at Dairy Queens throughout America.  I’ve seen the face of fear folks…and it has whiskers.”

Other politicians had more practical concerns.  Representative Ronny Munroe from Valdosta, Georgia sees the current “kitten picture crisis” as an example of the erosion of American values.  “Kittens are soft and weak. If you expose one to the extreme heat of a microwave oven or throw one into a bear cage, it will die within seconds.  What happened to the rugged individual?  Our nation was founded by men who would stay outside in a blinding snowstorm for three weeks without food or shelter while bleeding profusely from their eyes and scalp.  They didn’t have pictures of kittens or government programs to keep them safe,” announced Munroe during his daily massage at the Eggmont Golf and Athletic Club.

The Kitten Crime and American Freedom Act is being hailed as a landmark piece of legislation that should help create jobs and imprison political deviants throughout the state.  Similar pieces of legislation are being considered around the country. The new law stipulates that a first time offender could be forced to serve 12 months in prison and pay a twenty five thousand dollar fine.  A second offense could lead to the criminal being forced to attend five regular season Atlanta Hawks games.  Whatever effect the law has, it has become clear that posting pictures of kittens on Facebook is no longer a laughing matter.