Posted by Keith Spillett in General Weirdness on May 9, 2013 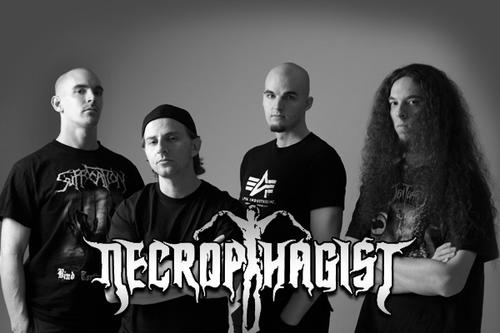 Over the past nine years, one of the great mysteries in heavy metal has been the strange and abrupt disappearance of German tech-death pioneers Necrophagist.  In 2004, they released the remarkably complex album “Epitaph” to universal acclaim. Then, at the height of their popularity, they disappeared.  There were random, unconfirmed sightings of them at concerts and even a band that claimed to be them who performed several shows in Europe in the late 2000s, but the earth had seemingly swallowed up the real Necrophagist.

This morning, the mystery was solved.  After hearing noises that resembled 64th notes, neighbor Charles Espejismo burst into the house next door and freed the band from their nine year captivity in the basement of a house on Euclid Avenue in downtown Cleveland.   According to Espejismo, he was walking back from McDonald’s, eating a Filet of Fish sandwich when he heard noises that “resembled some of that crazy stuff that was on Gorod’s last two records.”

Concerned that a technical death metal band could have been kidnapped and held hostage in the basement of his neighbor’s house, he burst through the front door and freed Muhammad Suicmez and the rest of the band members from the dungeon that had been constructed in the basement.  Suicmez had been bound, gagged and forced to play arpeggios for weeks on end with no food or water.

This is not the first violent, metal related attack in Cleveland, a city where musicians who employ progressive songwriting techniques are regularly beaten and maimed and hordes of torch-carrying, flesh-eating anti-tech death gangs control the streets at night.  The Cryptopsy Cryps made news back in 2008 when they ritualistically devoured the several members of Dutch metal legends Pestilence after a show at the Agora Ballroom.  The sole survivor of the attack, Pestilence vocalist Patrick Mameli, recalls that the Crips were eating members of the band and howling about how “irregular time signatures and fusion jazz have no place in metal.”  Mameli hid in his guitar case for three days before Cleveland police rescued him.

Now that Necrophagist is free, they are hard at work on a new record.  They plan to spend the next five years tuning their instruments in order to ready themselves to begin the long, arduous process of songwriting.  After that, they have secured ten years worth of studio time in order to allow Suicmez to work on the solo for the first song.  Finally, the band will start recording, a process that should take upwards of 25 years.  The band has assured its fans that they will have something out by 2057 or 2132 at the absolute latest.

Posted by Keith Spillett in General Weirdness on September 14, 2012

Chanting “Death to King Crimson Influenced Prog Metal”, thousands of enraged metalhead protesters stormed the US Embassy in Cleveland last night burning, looting and thrashing everything in sight.  The protestors, enraged by a 4-year-long performance of Opeth’s “Black Rose Immortal”, tossed copies of Opeth albums along with several mellotrons onto a burning pyre just inside of the embassy gates.

Opeth began performing the song at Cleveland’s famed Agora Ballroom back on September 12th, 2008 and have been unwilling to conclude the song in the years since.  The song was meant to be the finale to a highly successful show, but it kept going on.  First for hours, then days, then weeks, then years.  The crowd, which was filled to capacity at the start of the song, began dwindling.  By December of that year, only 7 fans were left in the building, but the band played on.

Alfredo Garcia, the head promoter for the Agora, has tried everything possible to get them off of the stage.  The sound was unplugged, the lights were turned out, a court order was issued to remove them, the local police attempted to tear gas them, he even hired a gang of hooligans and disgruntled Browns fans to rough the band up, all to no avail.

The people of Cleveland had finally had enough.  Groups of wild-eyed protestors camped out in front of the Agora to try to force them to stop.  When that didn’t work, they marched on the US Embassy and held over three months of boisterous demonstrations imploring President Obama to call out the National Guard in order to end the song.

Frustration and anger finally boiled over when a popular local Cleveland radio station made the mistake of playing Opeth’s “The Leper Affinity”.  Several metalheads began scaling the walls of the compound and a full-scale invasion took place.  Miraculously, only one person was injured, a 34-year-old man whose bullet necklace exploded while he was helping to set a car on fire.

In an exclusive interview with Tyranny of Tradition, Opeth frontman Mikeal Akerfeldt claimed that the band would eventually finish the song but “hadn’t yet gotten to the bass solo or the 2-year-long piano outro.”  He was stunned by the chaos the song had caused.  “We have to be living in a pretty ridiculous world to have music cause this level of violence and hatred.  You’d have to be a highly deluded fool to attack an embassy based on one piece of artistic expression,” lamented Akerfeldt right before he launched into an unprecedented 1467th acoustic guitar break.