Posted by Keith Spillett in General Weirdness, Health Tips for An Early Death on March 20, 2013 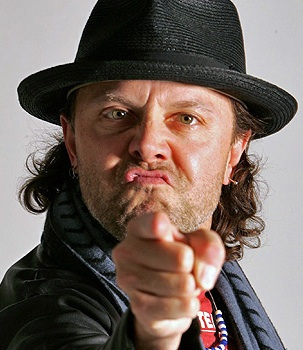 When Lars Ulrich paid $120,000 dollars for the rights to own former Laker great Wilt Chamberlain’s pituitary gland last month at a Los Angeles auction, experts speculated that he was losing his mind.  After all, what possible use could the gland of a four-time NBA most valuable player have?  People laughed as Lars overbid by almost $100,000 dollars to ensure he locked up the rights to the secretory organ.  They aren’t laughing anymore.

During a soon-to-be-aired ESPN commercial, Lars began gnawing on Chamberlain’s gland while the rest of the band stood around telling standard, boring rockstar jokes.   By the end of the commercial Lars had grown to the height of 8 foot 3.  Only recently, height experts had estimated Ulrich to be a mere 5 foot 6.   Some experts have speculated that Ulrich’s height may reach 11 foot 7 within the next month.

Ulrich Moments Before His Appearance On ESPN

The consumption of the glands by metal celebrities is rare but not unheard of.  Back in 2006, Slayer vocalist Tom Araya was seen chewing on the adrenal gland of famed actor Lee Marvin at a Corrosion of Conformity show.  At the time, many experts in the field of adrenal gland eating believed that Lee Marvin’s organ contained a rare hormone that would allow anyone consuming it to become invisible for 12 hours.  Araya, however, merely ended up with a headache and a brief, bizarre hallucination where he believed that he was former President Rutherford B. Hayes.

While consuming the glands of other humans tends to be unpopular, the inhalation of donkey glands has become a fad among many of today’s teens.  Snorting donkey glands (or glarfing as many teens call it) has become the main recreational activity of a whole generation of adolescents.  The effects of one “rail” of donkey gland can be feelings of unbridled euphoria, the power to control the minds of others, werewolfism and even, in some cases, vortex breath (the ability to exhale gale force winds from one’s mouth and nostrils).

In spite of the fact that they are illegal in 26 states, donkey glands are available at most corner gas stations and even some supermarkets.  According to some donkey gland abuse experts, 1 out of every 3 American teens have experimented with glarfing.   Police are reporting an alarming rise in the number glarfing and driving arrests.  The U.S. might well be in the grips of a donkey gland snorting epidemic.

The logistical ramifications of Lars’ decision to abuse the gland of Wilt Chamberlain could be significant.  After all, fitting behind a drum kit at nearly 12 feet tall might pose a serious challenge to the once diminutive Ulrich.  However, the bigger concern for society at large are the effects of a role model like Ulrich sending the message that it is “cool” for young people to engage in glandular abuse.

With America facing a glarfing crisis, some experts believe the tacit celebrity endorsement of the recreational consumption of glands could lead to a situation where all forms of authority are undercut and full-scale anarchy and chaos grip the nation.  The American family could be entirely annihilated.  Humans might be replaced by zombie-like, gland-addicted creatures that stumble through the streets at all hours searching for their next fix.

The entire fabric of modern civilization might be destroyed.  Or even worse, many of the long cherished records held by professional athletes could be shattered by hormone-gargling, mutant “superathletes”.  Many experts believe that the only solution to this epidemic is a full scale War on Glands where the military is used to break up international gland cartels and high school students are subjected to twenty hours per week of gland abuse reeducation.