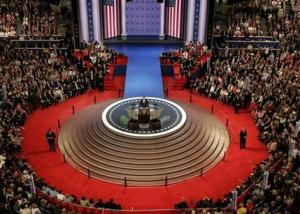 The Republican Party seems poised to return to power after their thrilling convention concluded in San Francisco, California last night.  The keynote convention address, given by Republican Presidential Candidate LeVance Nixon, brought the house to a twenty minute standing ovation.  Nixon pledged that the Republican Party is committed to “freedom now, freedom tomorrow and freedom forever” in a speech that some commentators are calling the best in the party’s history.  Several polls taken within minutes of Nixon’s speech showed that Nixon picked up 8 to 12 points against his opponent, Democratic Incumbent Juan Jose Herrera and now leads in 31 of the 44 states.

Nixon’s campaign theme of entirely eliminating nearly every function of government has gained steam in the past few months.  His major idea of privatizing the entire United States military and offering it to other countries as a mercenary defense force has captured the imagination of many.  Nixon claimed last month that the US could have the money to re-aquire the state of Oregon and allow the Social Security Age to dip below 95 for the first time since 2030 if the program is instituted.   Other Nixon programs, including the elimination of public schools by 2050, a program dismissing taxation for Americans making over 250,000 dollars a year and the immediate closing of the Food and Drug Administration, have also gained popularity since Nixon announced his intention to run for the Presidency last year.

A year ago, many of his ideas seemed far-fetched, but even the most radical ones have gained an audience.  Nixon’s revolutionary re-working of the welfare system, once thought to be too radical, is a hit even now with some Democrats.  His program, originally decried by many for its cruelty, would force people receiving federal benefits for more than two years to exchange a kidney for continuing benefits.  “The poor have senselessly and selfishly hoarded their kidneys without regard to the harm they have caused. You can sell a functional kidney for $25,000.  It’s time the poor do their part to make America great again! Even the lazy can contribute to our once great nation!” Nixon told the screaming crowd of conventioneers.

The Problem of the Moths has plagued much of the Presidency of Juan Jose Herrera.  Nixon looked to capitalize on this issue through a proposal to give a ten year long tax holiday to any corporation that captures more than 100 giant man eating moths per year.  According to Nixon the program will “encourage the growth of the real generators of the Great American Job Engine…corporations.  It will also help to stop moths from consuming the flesh of innocent, hard-working Americans.”

The energy around the Nixon campaign is a testament to the youthful, revitalized nature of the Republican Party.  Many of the parties core supporters are 18 to 34 years old.  They are attracted by the Parties strong anti-government message.  It was a Republican Congress and President, as most remember, that legalized all drugs in 2025 and gay marriage in 2026.  Since those fateful decision, the Party has attracted a slew of gung-ho, young supporters.  Hundreds of young Nixon supporters, calling themselves the Nixon Youth, staged a spontaneous rally outside of the Harvey Milk Arena after his speech.  “Nixon’s for freedom and freedom is for America.  Government sucks!  It’s that simple!” shouted Emilia Antonia, a Nixon supporter who had travelled all the way from the ruins of Boston to be a part of the special evening.

This entry was posted on July 19, 2011, 5:27 PM and is filed under The Politics Of Catastrophe. You can follow any responses to this entry through RSS 2.0. You can leave a response, or trackback from your own site.