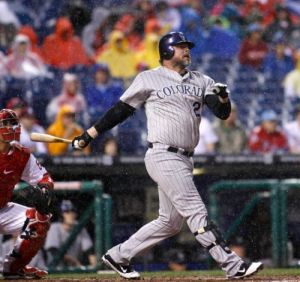 Some people dream of having their own twenty-room mansion, some fantasize about owning a yacht, others imagine purchasing their own tropical island. If money was no object and I could buy anything I wanted I’d immediately purchase the Colorado Rockies. Here’s the thing, I’m not even a Rockies fan and I’ve never been within 300 miles of Colorado. So, why would some multi-billionaire Mets fan want to purchase the Rockies? Because it would allow me to put into play a baseball system that would forever revolutionize how the game is played. I like to call the system Moronball and it could be the greatest innovation in how the game is played since the creation of the curveball.

Moronball is a system that utilizes several idiosyncrasies within the game to the greatest possible advantage. It is similar to the Oakland A’s  Moneyball system in the fact that it tries to achieve success without spending a large amount of money. The difference is that instead of creating a team built around a boring, clichéd goal like winning; Moronball is built around creating the most bizarre and entertaining possible experience imaginable.

The first and most obvious question is, ‘Why Colorado’? The homerun is the most critical offensive component in Moronball. Therefore, we will try to create a team that will hit the most possible homeruns and in the process sacrifice nearly every other important offensive category. The thin air of Colorado can offer a possibility of a nearly endless stream of homeruns if the fences are moved in a bit. Right now, you need to hit the ball 415 feet to get a homerun in straight away center. That’s ridiculous! Nobody wants to go to a game to watch long outs. We will move that that to about 350 and put a 275 foot short porch out in right and left field. As Founding Father and diehard baseball fan James Madison once said, “Chicks dig the longball.”

The next step is finding players that fit the system. Homerun hitters tend to be a bit overpaid unless they lack speed, the ability to hit for average and anything approaching average defensive ability. The Moronball Rockies are going to resemble a 35 and up beer league softball team. My outfield will feature athletes like Wily Mo Pena (5 HRs in 46 AB this year), Andruw Jones (14th on the active list of homeruns per at bat with 1 per every 17), and Matt Stairs (25th on the same list 1 HR per 19 ABs). I’d even talk to Barry Bonds about coming out of retirement to roam the outfield. Granted, what I have just outlined is the worst defensive outfield in the 150-year history of baseball, but the point is to win games 22 to 17, not 3 to 1.

At third base would be Russell Branyan (7th on the active AB/HR list with 1 per every 15 ABs) and our first baseman will be Cubs power hitter Carlos Pena (anyone who can hit 26 homeruns with a sub .200 batting average like Pena did last year belongs with us). Pena would cost us somewhere in the neighborhood of 10 million per season, but, honestly, we’re not really paying anyone else all that much so why not shell a little money out for a guy who could potentially hit 75 homeruns in our ballpark.  Many, many records would fall in Colorado.

It gets a bit tricky when you get to shortstop and second base, because the bloated power hitters are either making too much money for us or have been moved to the outfield. However, keep in mind that we are not committed in anyway whatsoever to playing anything that would even remind a baseball fan of defense. Therefore, I would use Spring Training to convert some Triple A power hitting phenoms who can’t make the show into middle infielders. Mike Hessman, who is currently playing in Japan, is the active minor league homerun leader. I bet that he’d be willing to play second base if I promised him an everyday gig. Shortstop would be manned by power hitting journeyman Bill Hall who is, ironically enough, actually a shortstop. Our catcher would be slugger Miguel Olivo who does almost nothing but hit the ball out the park.

Our starting pitching staff will be another unique facet of Moronball. 3 knuckleballers. That’s it! Tim Wakefield, R.A. Dickey and Charlie Haeger. Jim Bouton once said that knuckleballers pitch better when they are tired. These starters are going to be looking at logging something in the neighborhood of 40 starts so they will be completely exhausted. One of the most entertaining things to watch are knuckleballers, so I say, give the people what they want to see! We’d then carry 9 relief pitchers who could come in and throw hard in order to capitalize on the fact that seeing knuckleballers all day long will cause the opposition’s timing to be a bit off. They can all be flame-throwing journeymen; I really don’t care. We could even have a contest and put a fan on the roster as a middle reliever for the entire season. As long as our team ERA is somewhere below 15.00 we are going to be competitive or, at the very least, fun to watch.

The Rockies have a great amount of talent. I’m sure I could get the players I’ve mentioned because I strongly doubt teams like the Red Sox are going to turn down an offer like Troy Tulowitzki for 44 year-old Tim Wakefield. With the players I’ve mentioned and a few bench players, I think I can keep the payroll somewhere around 35 million per year. I will invest an additional 5 million in order to find the best steroid doctors in the world. If it means forcing our players to inject substances that would have made Mr. Ed win the Kentucky Derby, we will do it.

Baseball purists will hate our team. The commissioner will threaten to close us down. Announcers will lambaste us every time they watch us play, but a Colorado Rockies game will be the most exciting 6 hours the fans have ever seen. We will put hills in the middle of the outfield, place a giant sinkhole between first and second base and even mine the infield grass, whatever we need to do to make Rockies baseball the greatest show on earth.

This entry was posted on July 16, 2011, 4:41 PM and is filed under Blithering Sports Fan Prattle, General Weirdness. You can follow any responses to this entry through RSS 2.0. You can leave a response, or trackback from your own site.