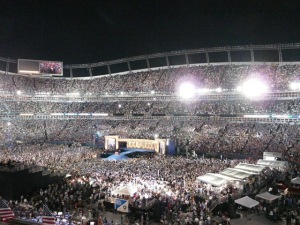 Last night, the 2040 Democratic Convention came to a boisterous end.  President Juan Jose Herrera gave a rousing speech to the conventions nearly 90,000 spectators who were crammed into Phoenix, Arizona’s newly built Cardinal Arena.  Phoenix, which some have taken to calling The Capital of The New Southwest, has been a leader in the recent nanotech boom that has revitalized the American economy and brought unemployment below 15 percent for the first time since 2019.  Herrera’s popularity has been on the upswing in the last year after a string of positive economic reports and an end to the nearly 10-year war in Ethiopia.   “A new day has dawned in America,” announced Herrera to the galvanized crowd, “and we are on the forefront of becoming great once again!”

The convention has not been without its difficulties.  Herrera, a master campaigner, led his party to victory 4 years ago by uniting a unique coalition of Hispanic Americans, Social Conservatives (SoCons) and Weather Watchers.  His ability to woo SoCons by connecting traditional family values and economic equality brought a new base to the Democratic Party and allowed them to win states that had traditionally gone Republican like Georgia and Utah in the 2036 election and in the 2038 midterms.  In the last Presidential election, nearly 78 percent of people who considered themselves SoCons voted for Herrera.  As President, Herrera has been able to pass several SoCon initiatives including a Constitutional Amendment mandating a moment of silence or prayer at the beginning of the school day.  He has been less successful with legislation banning the abortion pill and outlawing human cloning.  Pundits have predicted that he will have a difficulty carrying that high a number because of the challenge in his party from breakaway SoCons like Reverend Marcus Falwell-Guzman.  Falwell-Guzman, who famously quipped during the 2036 race that the only thing SoCons ever got out of the Republican Party were “prayer breakfasts and lip service”, is still considering a 3rd Party Presidential run, but insists he is firmly behind the President “for now”.

The Weather Watcher movement has also had issues with President Herrera.  The movement, started as a response to the Great Northeastern Flood of 2028, is firmly committed to strong environmental protection legislation including the bill to end the use of coal by 2050 that stalled on the floor of the Senate last month.  Herrera has embraced many of the Weather Watchers core issues but has not been successful passing many of their legislative priorities.  Still, the No Government Regulation by 2055 pledge issued by the Republican Party last year has forced most of the remaining Independent and Republican Weather Watchers into supporting the Democrats.

Then, of course, there is the Problem of The Moths.  In his speech, Herrera gave special attention to the issue stating,“The Problem of The Moths is not an easy one to solve.  It will require patience and commitment.  I see it not as a Problem…but as an opportunity.  We can add thousands of jobs by putting together task forces and work crews to deal with our Moth problem.  As your President, I will continue to call on Congress to spend whatever it takes to put an end to the Problem.  Together, as a nation, We Will Stop The Moths!!!”

The Problem of the Moths, now entering its 12th year, was a major issue Herrera used to help defeat Republican President Leland Jackson in 2036, but Americans have seen little improvement.  However, as of right now, voters seem to be willing to look past the issue in this election.  In a recent RGE Poll, 72 percent of Americans think that The Problem of the Moths will not hurt Herrera’s re-election prospects.  Still, some Americans are wary.  “He’s had 4 years to fix it and it isn’t getting any better!” shouted a Republican protestor in a moth costume arrested out in front of the Convention.   If the Problem doesn’t improve between now and November, the voters might just have a change of heart.

This entry was posted on July 4, 2011, 10:45 AM and is filed under The Politics Of Catastrophe. You can follow any responses to this entry through RSS 2.0. You can leave a response, or trackback from your own site.