Mitt Romney Claims He Was Abducted By “Evil Liberal Twin”

In a stunning announcement, Presidential hopeful Mitt Romney divulged that his evil twin Mittt was actually responsible for many of the decisions made while he was governor.  “After years of deliberation, I’ve decided to come forward with the truth about many of my decisions as governor of Massachutsetts.  Passing the health care bill and many other leftist decisions were made by my twin.  It is he who is a liberal.  I have always been committed to positions consistent with the most died in the wool conservative Americans.”

According to Romney, he and his twin are mirror images of each other.  Even the names are even extremely similar.  Romney claims that the twin’s name is pronounced exactly the same.  The final “t” is a silent and is neither pronounced nor written.   While the two share identical features, they couldn’t be more different in terms of political views.  Romney described his twin as a “card carrying socialist out of touch with the views of mainstream Americans” and excoriated him for his support of Massachusetts’ “dangerous and potentially apocalyptic” health care law.

During today’s press conference, Romney detailed how his twin locked him in a meat locker in the basement of the governor’s mansion for two years while “evil Mittt” made terrible decisions that turned the State of Massachusetts into a “communistic wasteland”.   Romney was only able to survive by eating Vienna Sausages and reading from the two books he had with him, The Bible and The Wit And Wisdom of Ronald Reagan.  “In my darkest moments, it was the words of God and The Gipper that allowed me to survive.”

Romney claims that at one point the Ghost of Barry Goldwater came to lighten his spirits.  After Goldwater’s pep talk, Romney was able to use a frozen lamb shank to smash the lock and escape. “If not for the spirit of conservatism, I’d have surely frozen to death,” announced Romney proudly.

There have been several other occasions where the Republican Presidential Candidate has been abducted and hidden by his liberal brother.  “That whole thing about being pro-choice, that was my twin.  And the stuff about letting clerks issue marriage licenses to same-sex couples.  Him again!  Pretty much all the things that have made me appear moderate in anyway whatsoever are the responsibility of Mittt.  I’ve never had a thought in my mind at anytime that was even remotely liberal.  I have never been within 300 feet of anyone who has ever been a member of the Democratic Party.  I will not eat food produced packaged in plants that employ liberals.  Mittt’s is the guilty one.  It was him all along!”

So far, no one has been able to contact Romney’s twin.  Romney has furnished the media with pictures of Mittt (see below) but claims he has not spoken to him in years and is not sure where he is.  “He’s joined Al-Qaeda for all I know,” fumed Romney, “I doubt we will see him again.  Certainly not until the New York primary.”

The resemblance between the two Romneys is incredible…. 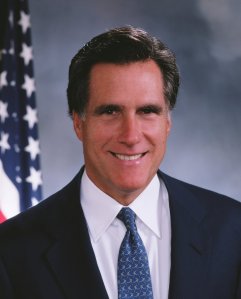 This entry was posted on June 29, 2011, 5:03 PM and is filed under General Weirdness, The Politics Of Catastrophe. You can follow any responses to this entry through RSS 2.0. You can leave a response, or trackback from your own site.