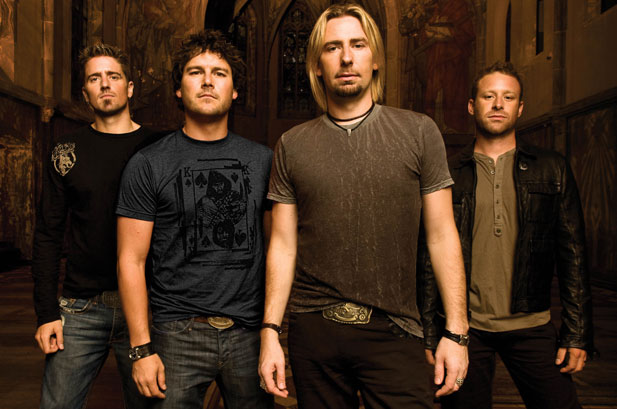 April Fools’ Day hasn’t been all that amusing for platinum selling recording artist Nickelback.  Singer Chad Kroeger woke up to over 23,000 emails written by fans who were confused by the Metal Archives.com April Fools’ Day prank that claimed, among other things, that Kroeger “waxes his chest and shoulders” and that he was “extremely touched” by Metallica’s recent album “Lulu”.  Kroeger and the rest of the band called a press conference at Alberta’s Hilton Hotel ballroom today to set the record straight.

“Okay….first of all, I have never waxed my shoulders.  I waxed my chest once when I pledged Lambda Chi in college.  But, that was it.  The story that has been circulating about me having eyebrow implants is also one hundred percent false,” exclaimed a visibly shaken Kroeger.

“And another thing, the whole story about us playing some NHL concert replacing Bathory.  Bathory for godsakes!  How many records have they sold?  Maybe if you are some lunatic who drinks his mother’s blood and crucifies cats in your basement you might own a Bathory record or two, but most of the people I know don’t really listen to them.  The idea that we would ‘replace’ them, like we are some sort of fill in for a second rate Slayer cover band, is completely absurd,” shouted Kroeger at a room full of shocked reporters.

“And the story about,” Kroeger paused to collect himself as a tear began to stream down his face, “the story about…..the person dying and the crowd saying something like ‘it doesn’t matter, just another dead Nickelback fan’……we love our fans.  Nobody….NOBODY loves the fans more than we do!   A Nickelback concert is like a family.  To imply that our fans, the very blood in our veins…..OUR FANS don’t care about each other.  Disgraceful!”

“I’ve worked my whole life….MY WHOLE LIFE!   To create music….for the people.  To have our record of excellence insulted by a….metal website.  A sophomoric prank that some jobless metalhead vagrant thought was funny.  Well…HAHAHA!  Hysterical.”

“You know….we’ve been through a lot.  When they wouldn’t let us play at the Super Bowl because they said we were nothing more than ‘an amped up boy band’, we were like ‘whatever’.  When haters say hateful things about us being ‘the audio equivalent of experiencing complete spiritual death’ and ‘the worst thing to come into the world since the Bubonic Plague’, we’re like ‘whatever’.  When our parents, OUR OWN PARENTS started telling people their sons worked as morticians rather than admit that were responsible for the song ‘Someday’, we were like ‘cool, whatever’.  But this metal website joke, this is the final straw!”

“So, until Metal Archives prints a full retraction and apologizes to us in person, we are through.  No more catchy lovelorn ballads!  No more rockin’ tracks to get your lady out on the dance floor!  Nothing!  We are through.  You don’t have Nickelback to kick around anymore!”

At that point, Kroeger slammed his microphone onto the table and stormed out of the hotel ballroom with his band in tow.  According to James Franklin, noted Nickelback expert and author of ‘How You Remind Me:  A Fans Guide To The Greatest Canadian Rock Band Since Triumph’ this threat might just be serious.  “You can only push a band so far,” said Franklin after the raucous press conference, “these boys have been unfairly targeted by a smear campaign so awful it would have made Gandhi look like an axe murderer.  How much more do these fellas have to take?”

Editors Note:  As of 9:30 tonight, the Nickelback April Fools’ Day page at Metal Archives has been taken down.  We are, at this moment, unsure of the reason the site has removed the offending material.  So far, we have been unable to reach anyone there for an explanation or comment.

This entry was posted on April 1, 2013, 11:20 AM and is filed under General Weirdness. You can follow any responses to this entry through RSS 2.0. You can leave a response, or trackback from your own site.