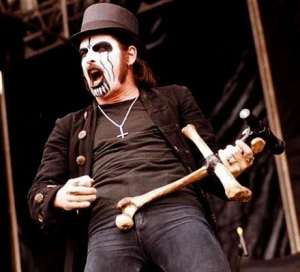 The King Speaking To Reporters At Today's Press Conference

Click here for up to the minute updates on King Diamond’s campaign for President.  Will he run or not????

Tired of the political bickering taking place between the Republicans and Democrats over the raising of the debt ceiling, metal legend King Diamond has offered a compromise in the hopes of averting a major economic crisis in the United States.  At a 7:30 PM press conference, The King scolded President Obama and the Republican Party for “playing political games” at a critical time.  “This is unacceptable!”  shouted the King in a mild falsetto voice, “My sleep has been disturbed by rumors of the US Bond rating being downgraded.  Do you people understand what the fiscal ramifications of that would be!?!?! This must stop nowwwwwwwwwwww!!!!!”

In response to the stalemate in Washington, The King offered an economic package that he felt would be acceptable to both sides.  The King’s debt deal would shave 3.8 trillion dollars off of the Federal Debt over a 10 year period with only a modest tax increase and minor cuts to Social Security and Medicare.  He intends to generate additional revenue by putting a 20 percent tax on all albums by “awful mallcore bands”.  He also plans on heavily taxing all hipster related products.  “You know those stupid tee-shirts they sell at Target with pictures of Spam and Dr. Pepper on them.  We are going to tax the hell out of them.  Teach those people to dress like adults!” opined the King.  “I’m not worried about hipster backlash.  Hipsters don’t even like hipsters!”

The King has summoned President Obama and House Speaker John Boehner to a meeting at his hidden lair located somewhere in the Alps.  The King’s Lair has only been seen by a handful of people and has never been photographed.  There have been rumors over the years that he has the world’s last remaining minotaur in a pit in his backyard.  According to The King the meeting, set for Tuesday afternoon, should straighten everything out.  “If I was able to put my differences with Mercyful Fate aside in order to reunite and make great music back in the 90’s, these humans can certainly put aside their petty differences,” said the King in a scornful, frustrated voice.

The King had harsh words for the politicians standing in the way of a deal.  He threatened Tea Party members and others who are willing to risk default on the U.S. debt with “a trip to grandmother’s house”.  The King has another press conference scheduled for Wednesday afternoon at which he plans to bring either a signed agreement or “a bag full of their skulls.”

This entry was posted on July 22, 2011, 9:23 PM and is filed under General Weirdness, King Diamond For President in 2012, The Politics Of Catastrophe. You can follow any responses to this entry through RSS 2.0. You can leave a response, or trackback from your own site.