Highlights From Albert Einstein’s Address to Congress On March 21, 1937

Posted by Keith Spillett in Pointyheaded Highbrow Stuff on February 24, 2014 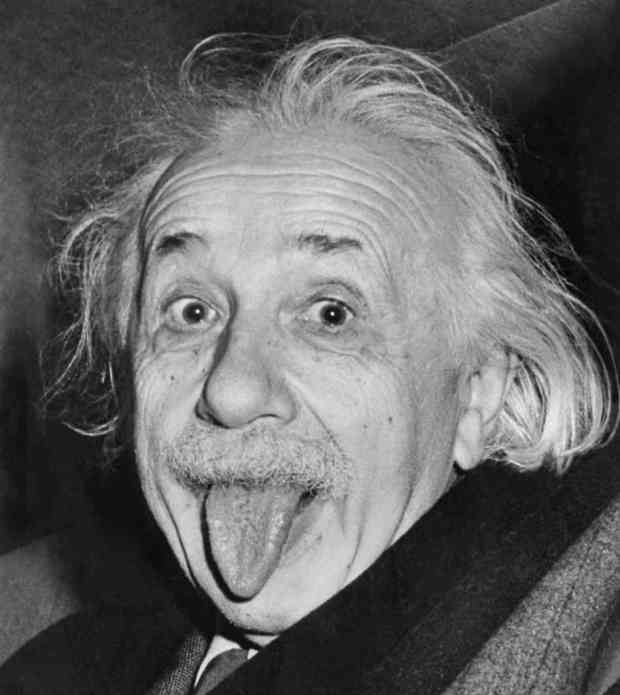 Einstein Moments Before His Speech

Many people remember Albert Einstein as the father of modern zoology, the inventor of the Kangol hat and the guy who posed for all of those Apple ads, but he was so much more.  He invented the Theory of Relativity, which outlawed marriage between a brother and sister, and came up with a formula for a diet soft drink so tasty it could not be distinguished from a regular cola.  He inspired many great leaders, including fight promoter Don King, who borrowed his trademark hairstyle as homage to the fallen scientist.

Einstein made many speeches.  Often, they were in front of audiences, but he was also extremely talented at communicating with animals and once did an hour-long speech on hypothetical calculus to a teary-eyed den of mountain lions on the outskirts of Inner Mongolia.  Probably Einstein’s most famous speech is the one he gave to Congress in March of 1937.  Communism, fascism and fashion trends like the jaunty mustache were on the march in Europe and China had been broken by a band of willful 6 year-olds who had gained access to the top shelf of the cabinet in the dining room.  Einstein saw what the world was becoming and issued this dire warning to the elected representatives of the people of the United States.

“My fellow Americans.  Today I come to philosophize with a hammer instead of a Bunsen burner.  My mind, weakened and tainted by the impurity of booze and fast women, is still capable of envisioning a way in which our world cane become a better world for our children.  And our children’s children.  And their children.  Along with their great grandchildren.  And the children who emerge from the wombs of those children.  On and on south of heaven.”

“Where was I?  Ah… A man becomes preeminent; he is expected to have enthusiasms. (Pause)  Enthusiasms (Longer pause) Enthusiasms.  (Really long pause) What are mine?  What draws my admiration?  What is that which brings me joy?  (Pulls out a baseball bat and holds it over his head)  Socialism!    Godless, freedom killing, spirit destroying, human-bondage creating, wealth redistributing, nation wrecking, mind-erasing socialism.  I dream every night of dragging the rich landowners into the street and stomping their faces into hamburger.  But all this is not important.  Today, I am here to talk about peace.”

“Many people have predicted that World War III would be really bad.  Terrible.  Awful.  I mean, really bad.  As a really, extremely smart person, I want to be clear that I too agree that war would cause both death and destruction.  Because I am smart, I am able to go into a laboratory and build a portal into the future.  I have done this.  I have seen things.  Bad things.  Bats eating the gizzards of children.  Children feeding children to other children.  And why?  War!  War, ladies and gentlemen…what is it good for?  Absolutely nothing.  Say it again y’all!” (Members of Congress shout “Good God” in unison)

“As I emerged from the portal, a giant talking eagle perched on my shoulder and whispered into my ear.  Eagles are wise birds.  They are the only animal in nature besides man that are capable of taking vast fields of energy, converting them into laser form and using them to melt the faces of their rivals.  This wise old bird told me something I’ll never forget.  Here is what he said…

“And I know not what weapons World War V will be fought with, but I’m assuming at this point, for World War VI, humans would be advanced enough to create giant clouds of ice that would rain flesh severing hail on all the cities of the people they hate the most.  And if World War VI be fought that way, World War VII probably will be fought by cybernetic beings capable of flaying the flesh off of an entire nation with the blink of an eye.”

“And if World War VIII is fought that way, aliens will probably come into the picture for World War IX because earth is the only planet remaining in the universe that has water, an element vital in the creation of alien hover boards and automated Chinese food buffets.  And World War X will probably be fought in space by planet-sized computers.”

“This will lead to World Wars XI though XVI, which will use technology that is so advanced my eagle brain and mouth are not capable of articulating what will happen.  But, seriously…it will be awful.  Not kidding.”

“World War XVII will actually be a period of 1000 years of peace intended to cause great suffering among the billions of people who seem to rejoice at killing billions of other people.  Then, the great peace will be broken by World War XVIII, a reenactment of World War VII performed by a group of talented actors in the foothills of North Carolina.  It will initially be meant to entertain survivalists and other fans of war, but it will morph into a 10 yearlong brutal, barbaric struggle control of a picture of actor Henry Winkler.”

“World War IXX will be fought from flying cars equipped with Gatling guns.  World War XX, The Platinum Anniversary War, will be the war to end all wars because Romans only came up with numbers up to twenty.”

“And this is why I, as probably the smartest person you will ever come in contact, with urge you to stop making other people die.  Because even if they are complete idiots, they can still recognize both pain and the absence of being alive.   And no one deserves that.  Even Germans.”