Posted by Keith Spillett in General Weirdness on June 26, 2012 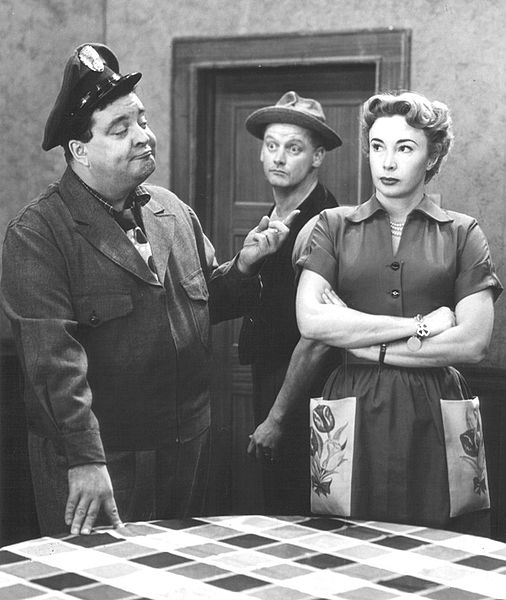 They are Canada’s favorite technical death metal band and now they are set to appear on CBS’ hit television show The Honeymooners.  Gorguts, those wild and crazy Quebecean death metallers who burst on the scene in 1993 with their Top 40 hit “Orphans of Sickness”, will become the first band ever to appear on the show.  Honeymooners star Jackie Gleason is a huge fan of the band who claims to have listened to the album Obscura over 400 times in a row when it was released.  Gleason, who became a fan when Considered Dead was released in 1991, said in a recent interview that no band he knows of “has been able to link the primal, bestial rage in the human soul with such profound, technical craftsmanship.”

The episode titled “Hey, Hey Luc Lemay, How Many Kids Did You Kill Today?” was filmed on Monday afternoon in front of a live studio audience.  The story is thought to be one of the more experimental Honeymooners episodes, although by no means as surreal as the episode where Ralph Kramden and Ed Norton are trapped in the stomach of a moose.

It begins with a knock on the door from a shady, elderly man played by Sir John Gielgud, the elderly British actor known for his stirring performance as the butler in the movie Arthur. Gielgud introduces himself as “Luther” and hands Alice Kramden a box.  He tells her she has three wishes once she opens the box, but should be careful what she wishes for.

After the man leaves, Alice and Ralph tear the box open only to find the paw of a monkey with a bow around it.  Ralph holds up the paw and wishes for enough money to never have to work again.  Suddenly, a box appears on their coffee table.  Ralph opens it and is stunned by piles of hundred dollar bills.  However, he is appalled to realize that in the box is also the severed head of his neighbor Ed Norton (played by the loveable Art Carney).

In spite of the beheading of Ed, they decide they are glad to have gotten the money and decide to make another wish.  This time Alice holds the paw up and wishes that she could get the chance to see Gorguts live for the first time.  Immediately, there is a knock on the door and the band appears.  They run around the house smashing the furniture and throwing food at each other.  Singer Luc Lemay knocks Ralph to the ground and tries to force him to swallow mustard until he chokes.  Meanwhile, guitarist Kevin Hufnagel destroys Ralph’s favorite bowling trophy by attempting to play a solo from “Rottenatomy” using the trophy as a guitar pick.  Finally, Alice has had enough.  She holds up the paw and screams, “I wish Gorguts would go away!!!!!”

With that, the band disappears and the archangel Gabriel appears on top of the dining room table blowing his horn.  Ralph, covered in mustard, launches into a recital of a Willie Loman monologue from Arthur Miller’s “Death of a Salesman” while Alice begins to grow a teeth out of the side of her face.  The episode ends with Ed’s head rolling onto the floor and the entire cast, including the head, launching into an impromptu version of the song “Officer Krupke” from the musical West Side Story.

Herded Through The Grapevine

There is an oft-quoted line popularized by Mark Twain that says, “There are lies, damned lies and then there are statistics.”  Twain clearly hadn’t listened to much sports talk radio. If he had, he would have said, “there are lies, damned lies, statistics and then there are sports talk show hosts with statistics.”  The truth of this quote became apparent to me, as it often does, while listening to the Colin Cowherd radio show the other day.

In fairness to Cowherd (which could only be his real name in a truly cruel universe), he does a very entertaining show.  He is engaging and often makes me want to argue with him, which seems to be the point of most sports talk radio shows.  Louisville Coach Rick Pitino once referred to sports talk radio as “the fellowship of the miserable”, which would apply to much of what I’ve heard, but not to Cowherd’s show which is quite upbeat and enjoyable if you can ignore the nearly endless stream of commercials for hair growth products and lite beer.  That being said, Cowherd is the best I’ve heard at taking a statistic and making it mean a whole bunch of things that it doesn’t.  If it weren’t for sports radio I am convinced he would be making millions of dollars a year convincing people that 9 out of 10 dentists prefer Aquafresh.  The ability to take numeric information and blow its significance way out of proportion to the point of near absurdity is a skill that those who are successful  in the business have mastered.

Cowherd can make a number dance like few I’ve ever heard.  In support of some ludicrous theory that a recently lobotomized six year old couldn’t have been conned into, I once heard the man say “if you believe that I’m right 98 percent of the time, which I am, I must be right about this as well.”  Basically, what he’s saying is that if you have been duped into believing the rest of the nonsense that comes out of my mouth, don’t you think you should believe this too?  What strikes me about this quote is how the number really makes the argument seem plausible.  Last time I checked, there was no agency that gives scores to sports talk radio hosts based on the veracity of their ravings.  He clearly was making a hyperbolic point about his acumen as an “understander of all things sports related.”  I caught myself thinking, after the sixth or seventh time I heard him say this, “well…he is right 98 percent of the time.  Maybe this isn’t so far-fetched.”  Take a fake number, repeat it over and over to justify an absurd claim and watch the magic happen.

Where Cowherd is really at his best is when he has a real number to mess around with.  The other day I listened to him take one statistic and turn it into an hour of wild speculation, conjecture and rage.  Sports radio at it’s finest.  He started the madness by giving a statistic that was tangentially related to Ben Roethlisberger, the quarterback for the Pittsburgh Steelers who seems destined to one-day share a prison cell with Art Schlichter.  The stat showed that the Steelers record gradually improved during each month of the season when Roethlisberger was playing and not on suspension, awaiting arraignment or injured.  During the first month of the season, the Steelers won half of their games and lost half, by December the Steelers significantly better than average (or .500 as is the accepted term among sports junkies).  Cowherd had the audience call in and guess what this meant.  By the second caller, Cowherd had found the answer he was looking for.  It was obvious that this stat proved, beyond all doubt, that Roethlisberger did not prepare enough in the off-season.  He went on to back his point up by referring to the fact that he had gotten into several scrapes with the law while he was away from his team.  I marveled at the simple beauty of this argument.  Point A:  The Steelers have gotten better in terms of wins and losses as the season has gone on over the last few years  Point B:  Roethlisberger has gotten in trouble with the law during the off-season.  Therefore, Roethlisberger is unprepared when the season begins.

There are an almost limitless supply of problems with this argument.  Quarterback production is only one in a series of thousands of things that affect a football game.  Maybe they had other significant injuries.  Maybe they played a more challenging schedule in September.  Maybe they are better in cold weather.  Using one of the more ridiculous clichés in sports, maybe they are more of a “clutch” team.  Maybe they are affected adversely by the position of the moon as it relates to Saturn during a certain period of the season.  Maybe they are lucky.  Who knows?   If anyone believes quarterback play always correlates with victory or defeat I could point you to any number of examples, including Roethlisberger’s nightmarish Super Bowl XL victory performance to prove the opposite.

Another problem with the argument is that he doesn’t bother to explain what being “prepared” means.  Is he implying that he doesn’t work out enough in the off-season?  If so, I would argue that he would be more adversely affected at the end of a rigorous, punishing football season than at the beginning.  As a basketball coach, I don’t do conditioning work with my players so they will be fast in the first two minutes of our opener, I do it so that they will be physically able to handle the long, tiring effects of a season.  I’m quite sure a good number of coaches and players think this way as well.  Maybe he meant Roethlisberger is not mentally prepared.  Does that mean he doesn’t watch enough game film?  Does it mean he doesn’t meet with his receivers after practice?  Does it mean he doesn’t spend extra time in meetings with coaches? Or is Cowherd, as I suspect, simply throwing out a buzzword at an easy target to try to work his audience into a lather? He never defines it or uses anything beyond this one, lonely stat to prove his point so how can I assume anything but the final option.

The worst criticism I could ever throw at sports radio is that it should be immune to this sort of critique because it’s just a mindless time waster meant to get people riled up for no purpose other than selling people things they don’t need.   That might in fact be true, but many people who enjoy sports spend a lot of time with it.  There should be some expectation of something beyond “getting the audience worked up” even in the things that we accept as entertainment. As an audience member, I appreciate being treated as a thinking human being who is interested in seeing how statistics relate to reality and not as a rage-filled 35-51 year old male who will consume more products if made angry.