When Is A War Not A War? 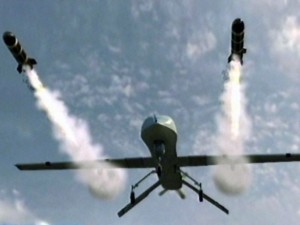 This Drone Is Providing Support But Is Not Actually Involved In War. See The difference?

A helpful guidepost in understanding the recent debate over President Obama’s use of the military in Libya and the War Powers Act is Garry Wills seminal work “Bomb Power:  The Modern Presidency and The National Security State”.  In it, Wills makes a strong case against the misuse of Presidential power that has come from the creation and control of America’s nuclear arsenal.  Wills case is a deeply convincing one that should be read in full by any one who wants to properly understand the major structural changes that have taken place in the United States government since the end of World War II.  A short but powerful section of the book to explaining issues related to Congress’ 1973 passing of The War Powers Act.  He makes argument that The War Powers Act itself is unconstitutional.

The Constitution seems to bear out Wills point when it clearly states in Article 1 Section 8 that “Congress shall have the Power…to declare war.”  The War Powers Act implies that the President must ask for a Congressional Declaration of War within 60 days of using the military in a conflict.  This appears to be illogical.  If Congress has the sole power to declare war why would the President be allowed to send the military into conflict for 60 days before these powers kick in?  How can Congress cede it’s right to declare war for any period of time? There is no clear provision in the Constitution that allows such a use of military power and there is certainly no provision that allows a Congressional abdication of this power.

President Obama has argued that in the case of Libya, the Executive Branch does not have to gain the approval of Congress because it is a limited military action and the United States is merely playing a supporting role.  Indeed, this logic has been used to justify many incursions into foreign countries without the approval of Congress.  The fact that it has been deemed acceptable in the past to skirt the separation of powers that have been outlined in the Constitution is certainly not an argument to continue doing so.  Further, what properly defines a supporting role in conflict?  If we commit the military to a conflict that is under NATO supervision the armed forces have still been called into service.  Even if we are using them in a limited fashion, it still constitutes calling them into service.  It is not hard to see how the “limited scope” of a conflict could be used repeatedly to justify the Presidents usurption of the Constitutional mandate of Congress for any reason whatsoever.  It is a legal fiction that continues an alarming trend of consolidating the power of the military in the hands of the Executive Branch.

The attempt here is not to make an Originalist argument for the interpretation of the Constitution.  Occasionally, there are moments where the necessity of the moment is more significant then the Constitution itself.  If the United States came under attack and Congress was unable to convene, their would be a rationale for the President calling up the military.  A once-in-a-lifetime national emergency could force the President to ignore the Constitution and take action to keep the American people safe.  This is clearly not the situation in Libya, nor has it been the case in just about every use of the military over the nation’s history.

The problem with the War Powers Act is that it legitimizes the belief that the military is the dominion of the Commander-In-Chief.  When a piece of legislation is passed to restrain someone’s power, it is an admission that they have that power in the first place.   In the case of Libya, President Obama is using a power he doesn’t have and actually arguing that it cannot even be limited Congress.

Support of the Libyan rebels might well be a worthwhile cause.  It is easy to understand the motivation to help support their struggle against Gaddafi’s tyrannical state.  If the rationale is so righteous and the need so great, why not make the case to Congress and ask it to take seriously the plight of the Libyan people by supporting their revolution?  It is true that Congress has been infested with obstructionist tactics and absurd partisan bickering, but are they so far gone that they are incapable of being trusted with any sort of worthwhile cause?

The task of using the military is a solemn one.  Its improper use has led to significant suffering and a slew of seemingly never-ending problems around the world.  The power was put into the hands of Congress because its use should be stridently argued and debated, not simply decided unilaterally. By legitimizing a process that shifts this power to one person instead of a legislative body drawn from the people we are continuing to feed a monster that grows ever more frightening by the day.

This entry was posted on June 18, 2011, 4:58 PM and is filed under Pointyheaded Highbrow Stuff, The Politics Of Catastrophe. You can follow any responses to this entry through RSS 2.0. You can leave a response, or trackback from your own site.