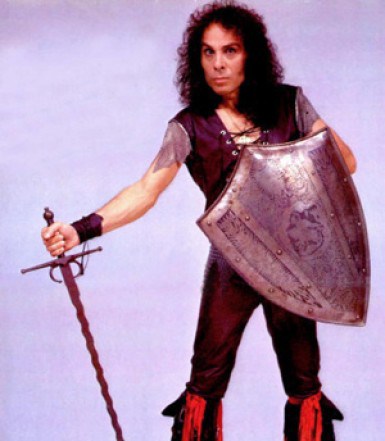 The soon to be released Dio cover album “This Is Your Life” has already received criticism from the person who knew Ronnie James Dio the best, Dio himself.  After his untimely passing in May of 2010, Dio’s corpse was preserved and put in a case at Oxford University, where he occasionally taught classes in the history of utopian socialism during his breaks from his life on the road. Dio fans from across the world have made pilgrimages to visit his body since it was encased in glass; regularly flooding the campus with some of the most unkempt, swarthy people that you could possibly imagine.

On Monday afternoon, Robert Owen, an overzealous British fan of the fallen rock icon visited the body in order to play Halestorm’s recently released cover of “Straight Through The Heart”.  According to several witnesses, about 36 seconds into the song, a tear streamed down Dio’s mummified face.  “Even though he was dead, you could tell that he felt terribly uncomfortable with what they had done to the song. All of a sudden, God as my witness, a tear streamed down his face,” said John Mill, a Dio fan who had flown in from New Zealand to pay his respects.

Reports of weeping corpses are not uncommon in England, where the average person walks around dead for ten years before being buried.  However, it is highly irregular for an inanimate corpse to excrete tears after being embalmed. Many Black Sabbath fans have speculated that if Dio’s corpse does rise from the dead his preserved remains might be replaced by vocalist Ian Gillan.

Some are calling the event a miracle. The Catholic Church has sent a representative to Oxford to confirm the weeping body.  If they are able to verify the claims of the witnesses Pope Francis has intimated that he would consider making Dio a saint. In parts of Central America, where a strange hybrid of Catholicism and Dio worship has become a popular religion, many are hailing this event as the coming of a new spiritual age of enlightenment.

However, many skeptics are claiming the “Weeping Dio” is merely a hoax concocted by mercenary publicists in order to promote the upcoming cover album.  Several attempts have been made to cause the body to continue sobbing, including blasting the entire Disturbed discography for 24 straight hours only inches away from Dio’s ears.  As of yet, no new tears have been spotted.

This entry was posted on March 27, 2014, 1:01 PM and is filed under General Weirdness. You can follow any responses to this entry through RSS 2.0. You can leave a response, or trackback from your own site.