Borne Back Ceaselessly Into The Past: A Psychological Review Of Gentlemans Pistols “At Her Majesty’s Pleasure” 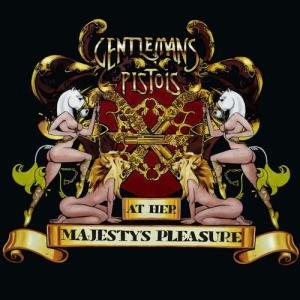 I wish I could go back to 1972, listen to Gentlemans Pistols new record “At Her Majesties Pleasure” in the era it was meant to be recorded and stab Richard Nixon’s Chief of Staff H.R. “Bob” Haldeman in the skull with an ice pick.  Okay, maybe not the last part.  Haldeman wasn’t such a bad guy.  He rocked that weird flat top hairdo that became the style in mid-90s rap music and became the best chemist Lompoc Federal Prison ever saw.  He would have dug the new Gentlemans Pistols record for it’s pure grit and bile-ridden effluence.  He was as malevolent a man as ever walked the earth. Supposedly, he tried to have Jim Nabors killed because he wouldn’t play Julie Nixon’s wedding.  I heard that once from a guy in a sauna in Davenport, Iowa.

Gentlemans Pistols is a collection of outstanding British musicians including Mr. William Steer, who gave my life meaning by writing riffs for Carcass that would have made Ed Gein recite Walt Whitman poems to a crowd of smiling 3rd graders.  Steer hasn’t lost a step.  The riffs that he and James Atkinson put on this album are pure roll around-in-the-gutter filth.   They buckle your knees like a 3-2 curveball and do not ask for your permission to continue.

Backwards in time to another place.  Transported to all that was seedy and repugnantly gorgeous about 70’s bar room rock’n’roll.  You are in a pool hall swilling cheap, half-flat beer being stared down by two menacing looking Hell’s Angels.  Not the modern Sons of Anarchy watching yuppies who go cycling between trading soybean futures, but the old school Sonny Barger led head-mangling, spleen eater types.  “Midnight Crawler” bellows in the background and you are completely there.  Everything is in its place.

At some point the whole retrofitted 1970s rock thing is going to get old.  The formula is, in fact, criminally simple.  However, put in the hands of poets like these a 3-minute-song can feel like a shimmering vacation into the dark heart of all that is ugly and cruel.  Something in their tone screams for your undying allegiance.  You would crawl through glass just to hear “Into The Haze” once more.  They are on the mainline, hooked into the Universal Generator and driving ceaselessly into the storm.   This is the purpose for which rock’n’roll was intended.  Not to be background music in the local Target or to be recited soullessly by an army of never-ending American Idol contestants, but to remind us of what visceral chaos lives just below the surface of our pristine, orderly world. 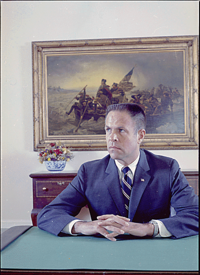 Bob Haldeman Would Have Understood

This entry was posted on June 20, 2011, 6:21 PM and is filed under Pointless Music Reviews. You can follow any responses to this entry through RSS 2.0. You can leave a response, or trackback from your own site.