Posted by Keith Spillett in General Weirdness on February 28, 2012 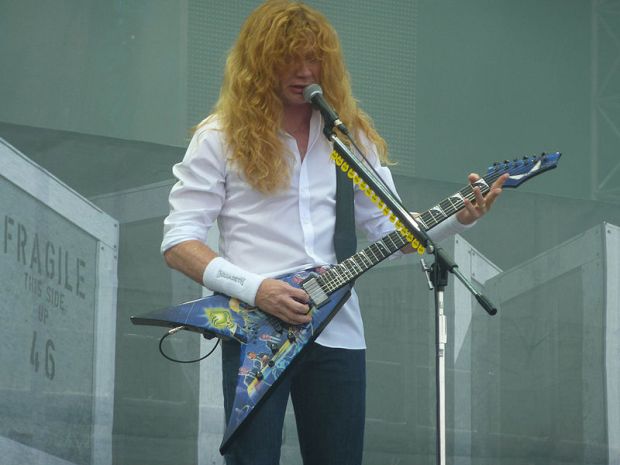 In a recent Rasmussen poll of Republican voters, over 70 percent cited Megadeth frontman Dave Mustaine’s endorsement of Rick Santorum as being the critical factor in their choice of candidates.  Mustaine’s endorsement ranked ahead of the economy, international terrorism, the myth of global warming, contraception, electability, a woman’s right to vote, the return of the messiah and abortion as being the most important factor in who they will choose to represent the Republican Party in November.  In spite of Santorum’s recent flood of absurd, borderline insane comments and Mustaine’s later remark that he had not, in fact, endorsed Santorum, the Megadeth connection has the former Pennsylvania Senator leading in the polls by as many as four percentage points.

Mustaine’s role as Republican king maker started back in 2004 when he announced his intention to vote for George W. Bush.  Bush was victorious.  Since then, many Americans have turned to Megadeth albums to help explain many of the difficult problems that face the nation. Mustaine, whose recent record Endgame railed against wireless tracking chips being put in people’s heads and Americans being forced into FEMA concentration camps, has become the snarling voice of the moderate wing of the Republican Party.

At a town hall meeting in Michigan, people were still abuzz with the news of Mustaine’s “endorsement”.  “I feel like Mustaine and I have a lot in common,” said 83-year-old Jane Summerville of Ypsilanti, “We both support a candidate who doesn’t follow the instructions of the New Ways Evil Book of Rules.  And that man is Rick Santorum.”

Agnes Murphy, 63, of Auburn Hills was even more impressed.  “I have been unhappy with many of the Republican candidates this year.  It’s like I told my husband, ‘If there’s a new way, I’ll be the first in line.  But it better work this time!’  Santorum has some radically new ideas.  I don’t care what the liberals say; it’s still we the people.  Right?”  announced Murphy while pacing, foaming at the mouth and waving her arms wildly.

According to James Sullivan, Santorum’s campaign manager in Detroit, Mustaine’s endorsement gives them an excellent chance to vanquish Obama, their hated foe.  “Obama is like the Pied Piper, leading rats through the streets.  And Americans are dancing like marionettes,” howled Sullivan at a room full of shrieking, Megadeth tee shirt wearing Republicans.

Mustaine’s foray into politics may be the most successful attempt for a metal artist to influence a major election, but it certainly isn’t the first.  Quorthon, of Bathory fame, actually spent much of 1984 away from music helping to run Ronald Reagan’s Presidential campaign in Utah.  Back in 1956, Slayer vocalist Tom Araya made history by supporting Adalai Stevenson in his battle against Republican incumbent Dwight Eisenhower. And who could forget when Tom Angelripper of Sodom threw his weight behind Rutherford B. Hayes in his election campaign against Samuel Tilden in 1876.