The Exorcism of Glen Benton 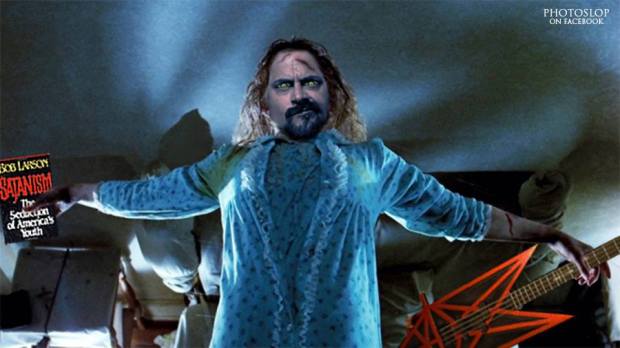 (This is probably the first article in history written using the Choose-Your-Own-Adventure style.  When you get to the bottom of the page, click on the link that leads you in the direction you want to go in)

You are called into the Pope’s office at 3 o’clock in the morning.  You were summoned by the Vatican because of your impressive track record of killing demons and vegetarians.  Back in 2008, you saved the entire city of Cleveland from the wrath of Belial.  In 2010, you entered the netherworld and rescued Raiders quarterback Ken “Snake” Stabler, who was sent to Hell by God during a high stakes all night poker game with Satan.  Thanks to you, Stabler is alive and well, living in Foley, Alabama.

The Pope seeks your help.  He has heard that a demon known as Rotmensen has been living inside Deicide singer Glen Benton for the past 20 years.  He has been using Benton as a way of spreading the word of Satan to the souls of metalheads and yoga practicioners and has succeeded in causing great harm to this world.  The Pope is particularly angry about the Deicide concert he attended in Argentina last year. Benton showed up an hour late and they only played four songs because of an issue with the club’s management.  The Pope had only experienced this sort of insolence once before, at a Sly and The Family Stone concert in 1978, and swore that if he became Pope the demon inside of Benton would be punished.

He has offered you great wealth, fame and the first four Manowar albums on vinyl in return for exorcising the demon in Benton.  If you choose to go, you will be accompanied by the priest who performed the exorcism on Cronos back in 1996. He is world renowned for his ability to exorcise particularly evil, heavy metal ghouls.  If you are defeated by the demon, your soul may forever be damned to the worst neighborhoods in Hell.

Agree to participate in The Exorcism of Glen Benton

This entry was posted on June 25, 2013, 3:46 PM and is filed under The Exorcism of Glen Benton. You can follow any responses to this entry through RSS 2.0. You can leave a response, or trackback from your own site.