The Pitt of a Jamie Dixon’s Fears 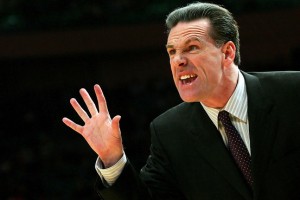 Unless you are a hardcore Butler basketball fan or a masochist, the ending to the Pitt/Butler NCAA basketball game this past Saturday was awful to witness.  Two basketball teams played 39 minutes and 57 seconds of basketball that was so beautiful it would have made John Wooden himself well up with tears.  Then, inexplicably, both teams spent the last three seconds going out of their way to implode on a Bill Buckner-esque level never seen before in the NCAA tournament.

The March Sadness began when Butler guard Shelvin Mack, who had played an astonishingly good game up to that point, fouled Pitt guard Gilbert Brown nearly 50 feet from the basket.  There was almost no chance Brown would have converted from that distance.  Instead of a wild shot from an absurd distance, Brown got to settle in on the foul line and shoot free throws.  Mack’s foul was beyond inexcusable.  For exactly 1 second, it stood in the annals of NCAA history as the most horribly timed foul ever committed.  Then, Pitt’s Nasir Robinson took things to the next level and committed a foul that will forever awaken Pitt fans in the middle of the night screaming.  With the game tied and about a second remaining, Robinson fouled Butler’s Matt Howard on a rebound.  Howard was roughly 90 feet away from the basket with his back turned.   The foul allowed Howard to go to the free throw line and hit the game winning shot.

The game was a catastrophe for Pittsburgh.  Few teams have ever self-destructed at such an inopportune moment.  The equivalent of this foul in baseball would have been hitting the game winning homerun in the World Series then missing 1st, 2nd and 3rd base.  Nasir Robinson, who seems like a nice enough human being, will probably have to carry this one for the rest of his life.  You never want to see anything like this happen.  However, Pitt’s coach Jamie Dixon has been excoriated for how the game ended.  I feel like most of the rage that is heaped on people that make mistakes at critical moments is unfair.  It is awful that Robinson will have to be known for this for the rest of his life.  The criticism of Dixon is particularly unsettling because, unlike Robinson, he didn’t actually make a mistake.

The big knock on Dixon was that he should not have had the rest of the Pitt team on the foul line when Brown took his second free throw.  I believe that this argument doesn’t make sense.  The game was tied at 70 to 70.  One of Pitt’s major strengths during the season has been their rebounding.  Pitt ranked seventh in the country as a rebounding team with 40 rebounds per game.  Further, nearly 42 percent of their rebounds have been offensive, the highest percentage in the country.  Dixon’s thinking was sound.  He believed that it was much more likely that one of his players might grab a rebound and tip it back in then one of his experienced, veteran players would commit a ridiculous foul.  Had the Pitt player grabbed the offensive rebound and put it in, few people would be arguing that Dixon shouldn’t have had players on the line.  Had Pitt been up a point, it would have been wise to pull the players off the line, but NOT in a tie game.  If Dixon had pulled his players off the line and then lost in overtime, I believe his decision would have been much more suspect.  Their rebounding prowess gave them a chance to win and Dixon tried to capitalize it.

This is not an argument to heap scorn on Robinson.  Everyone makes mistakes.  He happened to have his at the single worst moment imaginable.  There is no point to beat up on Robinson for his error.  He knows what he did and why he shouldn’t have done it more than anyone on earth right now.  However, criticizing Dixon for decision-making here is completely illogical.   As a coach, one thing that you have to accept is that bad things happen sometimes when your players ARE in a position to win.  You can do everything right and still lose.   Dixon made a logical, appropriate decision that didn’t work out.  Being a coach means living with being second-guessed, even when you are right.  This is an occupational hazard.   Unfortunately, part of the narrative around this game is that Dixon should have made a different decision.  One day, the memory of this game might cost Dixon his job.  This is unfortunate because he did the right thing here.  It just didn’t work out.