How To Avoid Talking About American Sniper 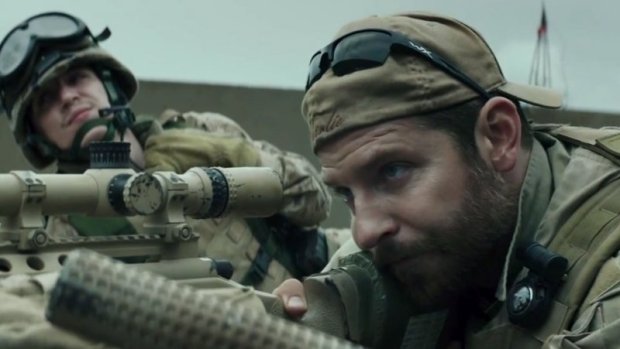 In my ongoing refusal to take any “enlightened” debate about American culture seriously, I’ve been working on ways to extricate myself from discussing American Sniper with anyone.

The trick is to say something so outrageous that the person who has sucked you into the discussion will dismiss you as being completely insane or will simply have nowhere to go with the conversation. They will then awkwardly switch topics and begin frantically discussing the weather or the inflation level of the average NFL football.

Often, if done correctly, the person will simply move on to hassle someone else, repeating the same canned, hackneyed monologue about how people today hate good old fashion American heroism or how George W. Bush is about as smart as a bag of kidney stones.

You will have done the only thing that a sane person can do to survive the onslaught of the only product this nation is capable of producing anymore…useless, illogical opinions. Then, you can devote to focusing your mental energy on truly important questions, like who will play drums on the next Megadeth record.

Feel free to use these:

“People say that American Sniper guy was an evil guy and a killer and whatnot, but personally, I think his clown paintings are beautiful.”

“You think being a marine sniper is stressful! You should try coaching high school basketball.”

“Speaking of American Sniper, have you ever seen Gigli?”

“You know, if guns were illegal in Iraq, none of this would have ever happened.”

“You could tell when you were watching Bradley Cooper in that A-Team movie a few years back that he was an actor cut out to make important films.”

“They should make a movie about a hipster sniper. He could carry a ferret with him at all times and hum MGMT songs while he shoots people.”

“Did you catch the Jessie Ventura cameo?”

“Do you think Clint Eastwood is ever going to do another film with that orangutan?”

“Wouldn’t it have been awesome if Clint Eastwood made the whole film exactly the same way, but instead of having Bradley Cooper play the sniper, he used the orangutan?”

“My only problem is the movie lacked diversity. Sure he killed 160 people, but they were pretty much all the same race.”

“The movie poignantly displays man’s quest to preserve his humanity in the face of having to make life or death decisions in the service of his nation. It speaks to the deepest and most powerful emotions a person can possibly experience. Have you played the Xbox version yet?”

“You want to talk about a talented sniper! I hear the sequel to American Sniper is going to be about a marine who hit a moving, guarded target with 2 shots from almost 3 football fields away in a building three stories up. The future of the Free World was in his hands and his performance was flawless. His aim was so good that, to this day, most people fail to believe he was capable of doing it alone.

His name was Lee Harvey Oswald.”

(thanks to R. Lee Ermey, Gustav Hasford and Stanley Kubrick on that last one)

This entry was posted on January 23, 2015, 7:12 AM and is filed under Here's Why I Dislike You So Much. You can follow any responses to this entry through RSS 2.0. You can leave a response, or trackback from your own site.