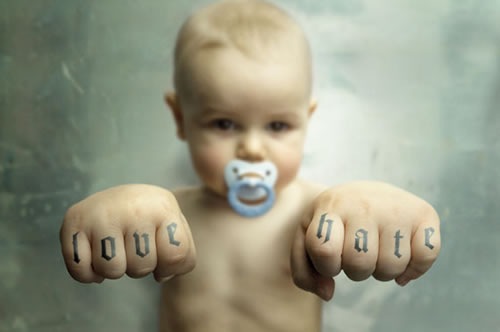 One of the hideous, terrible truths about parenting is that with one stroke of the pen you are capable of sentencing a child to a lifetime of cringing every time attendance gets read aloud in a classroom and cowering sheepishly while handing in job applications.  Marshall McLuhan once said “a name is a numbing blow from which a man never recovers.”  In the case of many of the names dropped on poor, unsuspecting infants this year, one would expect them barely able to walk by the time they are 35.  2013 was a year that famous parents sentenced their children to name based humiliation at a near record pace.

In any society that valued justice or decency, parents who name their kids things like Type Two Diabetes or Pusillanimous would be rounded up and caned in the public square. Do celebrities really need more attention than they already get? By giving their babies ridiculous names, not only are they garnering more attention in the media for themselves, they are also dooming their child to a lifetime of recognition as a psuedo-celebrity that will never be taken seriously.

Honestly, would you go see a gynecologist named Respektdakrew Smith, OBGyN? Or a lawyer named Heavenly Flowing Lava Monster Bison-Lipton, Attorney at Law? Probably not. These unfortunate kids will have to live off of reality TV and royalties from tell all novels about their parents eating the flesh of homeless people at Hollywood parties.

The other problem with celebrity baby names is that they create a culture in which lesser celebrities copy their unfathomable taste, thereby creating, if you can believe it, even worse names. In any given year you will see themed clusters of baby names around, say, like automobiles, or intestinal parts. The following is a brief year-in-review of the worst names of 2013.

First there was Everest Hobson, (girl), born to George & Mellody Lucas. While the original name was not so bad, the names that followed in the theme of mountains seemed to lose their charm with each new birth. This May, Charlie Day and Elizabeth Ellis named their newborn daughter Matterhorn Lucas. Not to be outdone, Mark Duplas and Katie Aselton names their son baby Titicaca.  Finally the anchor from Channel 2 News in Chicago upped the ante on mountain baby names and ended the trend when he dealt the punishing blow by bestowing the name K2 on his baby girl.

Bear Winslet, Kate Winslet & Ned Rocknroll’s son, popped out of the womb with a machete and a flint, ready to spend the night inside a dead camel for survival. This name was silly enough, but this sparked Lauren Parsekian to name her daughter Pink Fairy (a type of armadillo). The animal names continued with Jason Sudeikis and Olivia Wilde calling their son Parastratiosphecomyiastratiosphecomyioides. But the worst animal name goes to Sacha Baren Cohen and Isla Fisher who named their twin daughters Embarrassment and Panda. An embarrassment is the technical term for a group of pandas, and is also what these parents should be feeling about their naming abilities.

More embarrassment arrived with the naming of Emile Hirsch’s son, Valor, who was obviously showing noble characteristics when he escaped the womb while screaming bloody murder with tears rolling down his cheeks. Other notable but flawed character trait baby names this past year include Joanna Newsom’s daughter Fanatical and Will and Jada Pinkett Smith’s son, Vacuous.

Even heavy metal, whose artists once went out of their way to avoid mainstream trends, have gotten into the fray.  Dave and Madolyn Mustaine named their newest daughter Psychotron.  Venom frontman Cronos and his wife, television star Fran Drescher, brought young Ayatollah Khomeini Lant into being last month.  Slayer axe man Kerry King and his bride of 10 years, former Texas Senator Kay Bailey Hutchinson, decided to cash in on an offer from a major corporation and name their child Smoothie King (Burger King made a slightly lower bid).

Shall I continue with the list of offenses? Kim Kardashian & Kanye West named their daughter North, prompting a rare copycat move by Bradgelina (who could have easily started their own trend) who named their adopted daughter, In That General Direction.

Of course, every year the nature loving hippies have to sacrifice their child’s named identities to prove their love for the great mother, the wolf teat, or whatever it is they are worshipping these days. Holly Madison named her daughter Aurora Rainbow, Channing Tatum and Jenna Dewan-Tatum named their son Mitochondria Cell-Division, and Kaitlin Olsen named her baby girl Chlamydia Luekorrhea. It kind of makes you miss the good old days of Moonunit and Dweezil.

As much as we can hope and pray that this celebrity baby naming madness will come to an end, we know from scientific graphs drawn by lemurs paid in cicada that it will only get worse. Luckily, the heat death of the universe is just around the corner and all of these really clever ideas and fascinating people will one day be sucked into a vast nothingness in which their existences will no longer matter to anyone or anything.

This entry was posted on January 1, 2014, 11:11 AM and is filed under Excessive Cruelty Towards Strangers. You can follow any responses to this entry through RSS 2.0. You can leave a response, or trackback from your own site.