Posted by Happy Metal Guy in General Weirdness on July 10, 2016 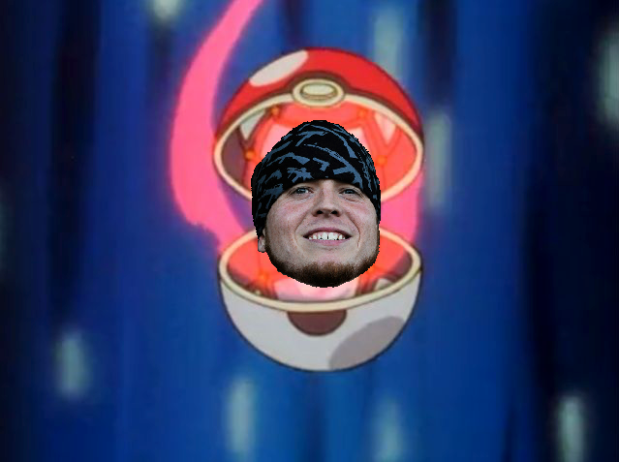 In an ironic twist of fate, renowned motivational speaker Jamey Jasta unwittingly became a potential future client of himself. The Hatebreed frontman has been captured in Florida for allegedly trespassing on multiple private properties late at night while playing immensely popular smartphone game Pokémon GO.

Jasta, 39, was caught Friday at around midnight in Tampa, Fla. Police found him inside a branch of Planet Fitness, furiously tapping on his smartphone while pumping a fist in the air, and shouting: “Perseverance! Against all opposition! Crushing all limitations!” He has been charged with breaking and entering, trespassing, disturbing the public peace, intimidation, obstruction of justice, and vandalism.

According to the Hillsborough County Sheriff’s Office, five police officers had to tackle an uncooperative Jasta, forcefully pin him to the ground, and wrestle his smartphone out of his hands.

“The guy was nuts. He refused to let go of his smartphone until he ‘caught Machop’,” said Officer Jenny of the Hillsborough County Sheriff’s Office. “After being pinned down, he was still shouting about being unbreakable, and how he was not going to faint without a Pokémon battle.”

Before his run-in with the police, Jasta was captured on CCTV inside seven other private properties (all of which are also gyms) doing the same thing: tapping furiously on his smartphone. The footage also revealed that before he left each gym, he wrote his name on its entrance statues in popular Windows typeface “Jokerman” using a black Sharpie.

Various eyewitness accounts detail how Jasta was fervently attempting to make eye contact with anyone in his vicinity while he was travelling to each gym. A victim told Hillsborough police that she accidentally made eye contact with Jasta at around 11:15 p.m., and Jasta challenged her to a Pokémon battle. When she declined Jasta’s offer and walked away, Jasta started chasing her with his fists raised, hollering “prepare for war” and “destroy everything” in rapid succession repeatedly.

Jasta, born James Vincent Shanahan, is a founding member of various motivational speaking agencies. His best-known agency, Hatebreed, was formed in 1994 in New Haven, Conn. The group has won numerous awards for their inspirational oratory and community work.

Pokémon GO is an augmented reality mobile game developed by Niantic, Inc., and published by The Pokémon Company. It is a spinoff of the immensely popular Pokémon videogame franchise, and free-to-play on Android and iOS gadgets.

Following his capture, Jasta was deposited at the Hillsborough County Sheriff’s Office. He will be withdrawn Monday at 2 p.m., and stand trial at Hillsborough Courthouse for his criminal charges.

In an esoteric statement to his followers, Jasta said that “sometimes standing for what you believe means standing alone,” and that he was “born to bleed, fighting to succeed, built to endure what this world throws at [him].”

Posted by Keith Spillett in General Weirdness on July 8, 2015

As reported by Loudwire, the frontman of a famed metalcore band announced that he will be parting ways with the band. The news comes just after the release of the outfit’s latest studio album, released on a major label.

Many were shocked to hear that the vocalist would be departing just after the metalcore act was starting to gain traction in the mainstream, not to mention right before their world tour with a lauded post-hardcore band and rising pop punk act.

Many initially thought that this would be the end for the metalcore cohorts, but later, the band’s guitarist issued a statement via the metalcore clique’s Facebook page:

UPDATE!!!!!!! 11:34 AM EST It was just announced via Twitter that the vocalist of a world famous deathcore band will be joining the metalcore monolith full-time!!!! 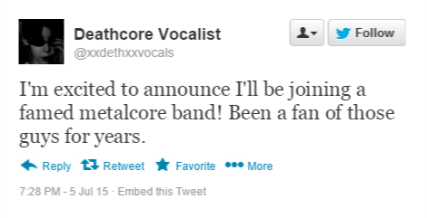 The deathcore vocalist went on to disperse more exciting news via Twitter, the biggest announcement being that the infamous metalcore band will soon be heading into a studio to begin working on a new studio record, to be released sometime on a record label in the future.

We here at this music website are looking forward to see what this metalcore titan has up their sleeves.

(Article contributed by investigative reporter Jess Casebeer.  For more hard hitting jurnalizmcore, check him out at his site)