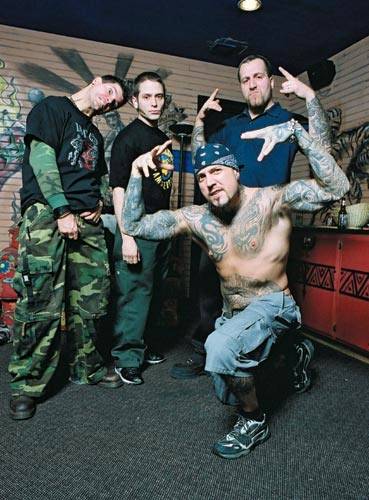 Chances are, if you are an American under the age of 85, you remember where you were the first time you heard “Punishment” by Biohazard.  As Brooklyn became “the next Seattle” in the mid-1990s and New York City Hardcore took over the Billboard Charts and Top 40 radio stations, Biohazard became the band that defined a generation.  It was the time of full body tattoos, doo-rags and ordinary Americans spending their days dressed like characters in “The Warriors”.  However, a recent report by The Dartmouth Journal of Advanced Medicine and Spreadin’ The Hardcore Reality, has called into question the veracity of one the band’s best known lyrics.

“Punishment” became the successor to Nirvana’s “Smells Like Teen Spirit” as the most popular song on the planet in 1992.  The song is particularly memorable for the lyric “In reality, we all must face the fact that the majority of people are out there smoking crack.”  The words were based on exhaustive research done by the band on the use of crack-cocaine by Americans.  According to the album’s footnotes, 56 percent of Americans were “out there smoking crack” at the time the song was being recorded.

At the time of the albums release, some researchers questioned whether that many people were really hooked on the dangerous, highly addictive substance.  Harvard scientist Kenn Nardi looked on Biohazard’s findings dubiously when he first heard the song.  “Alright, yes, there are many people addicted to crack.  But, for Biohazard to put forth the thesis that a “majority” of people” were hooked on the narcotic was a bit of an overstatement.”

Nardi, who received his PhD in New York City Hardcore Studies  in 2003 and has extensively studied the cultural context and metaphysical meaning of Biohazard lyrics, went on to say, “I question if their sample size was large enough to justify the generalization.  And, honestly, I’m not clear how they would define “out there”.  Do they mean to imply this is only a study of outdoor crack users?”

However, the recent Dartmouth study has conclusively proven that the majority of people in 1992 were not “out there smoking crack”.  According to studies’ co-author John Emery, “There are significant errors in Biohazard’s findings.  First of all, they oversampled metropolitan areas.  Data collection was also an issue.  We have concerns that several of the studies participants were actually local winos who were paid in bottles of Ripple, Night Train Express and Maddog 20/20 and were willing to say anything in order to get their next drink.”

Current members of Biohazard have yet to respond to these charges of academic fraud.  However, former lead singer turned actor Spyder Jonez did take a moment away from the filming of his new action film “Member of The Beast” to say that he “unequivocally stand(s) behind both the qualitative and quantitative methods used by the band and reject the possibility that issues like the cohort effect or some of the microfactors that hampered the work of Reinhart and Reigoff have impinged on the efficacy of our data collection and textual analysis.  Most people is just crackheads, yo.”

Biohazard’s new album, Ermine Discipline, is expected out in the Spring.

This entry was posted on November 11, 2013, 3:09 PM and is filed under Pointyheaded Highbrow Stuff. You can follow any responses to this entry through RSS 2.0. You can leave a response, or trackback from your own site.