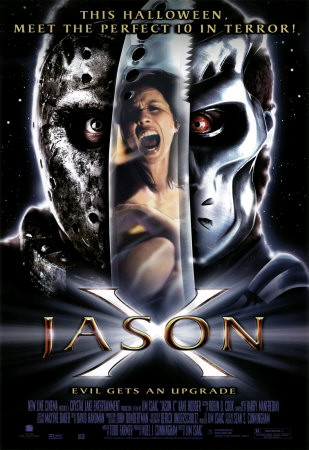 James Isaac’s classic 2001 film Jason X proves beyond a shadow of a doubt that horror films can be about much more than blood and guts.  Instead of plodding down the well-worn path of past slasher films, Isaac takes the series in a bold and beautiful direction.  In Jason X, Jason Voorhees discovers that there is more to life than simply killing frightened co-eds with chainsaw.  He has tired of a life of senseless murder and finally finds inner peace.  Jason X is the redemptive tale of Jason’s conversion to Islam and the strange course it sets his life on.

The film begins with Jason’s arrest and capture for the murder of 827 people at Camp Crystal Lake.  While in prison, Jason begins to feel a deep sense of inner sadness for his crime.  He is lost in a sea of sorrow when he meets Baines, a convict who changes his life forever.  Jason is introduced to the Koran and the way of Muhammad and for the first time begins to see something greater than himself in the world.  One of the most poignant scenes in recent memory comes when Jason, feeling terrible remorse for his crimes, begins to cry uncontrollably.  The image of tears rolling down that hockey mask is something I don’t think I will soon forget.

Jason is finally released 20 years later.  He returns to society and begins to work for Elijah Muhammad, one of the day’s great religious leaders.  At first, he gives speeches supporting Muhammad, but quickly becomes a well-known, popular leader with a slew of his own followers.  In order to stop Jason from taking over the Nation of Islam, Muhammad has Jason kidnapped, cryogenically frozen and hidden in the basement of a local public library.

Jason is re-awoken in the year 2455 by a crew of space travelers who are returning to reclaim the Earth (which was abandoned years earlier because of global warming and high taxes).   At first, when the crew discovers Jason they treat him well, but soon they begin to harass and chide him because of his unwillingness to take off the hockey mask.  Jason’s spirituality is tested as he begins to consider taking a machete to the explorers in revenge for their taunts.  Will Jason overcome his demons and chose the path of peace or will he go absolutely berserk and start killing people with random power tools?  The conclusion is a deep and powerful statement on the human condition and on the effects of liquid nitrogen on a person’s skull.

This entry was posted on February 23, 2011, 2:21 PM and is filed under Mr. Spillett's Academy Of Film Study For The Mentally Tormented. You can follow any responses to this entry through RSS 2.0. You can leave a response, or trackback from your own site.