King For A Day: My Adventures Roaming Around The City of Atlanta Dressed As King Diamond

I’ll admit it; I’m probably not the most normal person on the planet. Some would say there is no such thing as “not normal”. They have never encountered a 39-year-old man pretending to be King Diamond at a Quik Trip gas station trying to buy a chocolate chip muffin and a Pepsi.

For a very long time, I have wondered what it would be like to walk around a major American city in King Diamond paint for an entire day. I’m not sure what started the wheels turning on this one for me. I never particularly liked mimes or really anyone who wears large amounts of face paint.

I’m a moderate fan of The King. I’ve gone through phases where I listened to a lot of his music, but I’m certainly not like the guy who was standing next to me at the 1993 Halloween concert holding a wooden cross upside down and chanting in tongues for 20 minutes before The Man got up on stage. 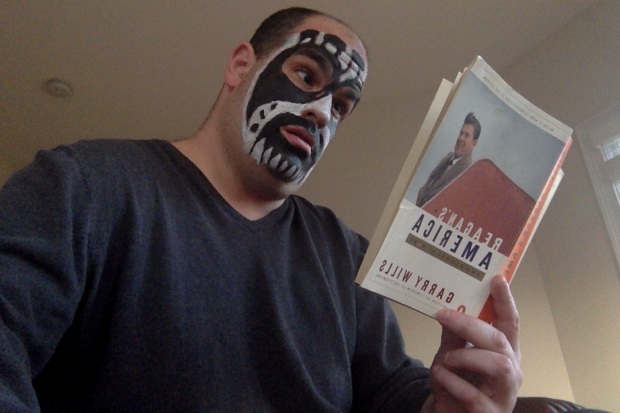 The transformation process was a bit strange. It took about 45 minutes to get the makeup right. I sat there listening to “Don’t Break The Oath” staring off into space as I was painted. I once wore rouge for a 5th grade presentation of Annie in which I had a brief role as one of FDR’s advisors (Harold Ickes), but beyond that, I had never gone through the process of having makeup applied to my face.

It’s uncomfortable. I immediately felt empathy for clowns, particularly this one woman “Miss Teacup” who I once met while she waited for the tow truck to come pick up her broken down Toyota Tercel. She was standing there in 95 degree heat wearing about a half of a pound of makeup frantically trying to contact the family of the child whose birthday party she was supposed to be at. If I knew then what I know today, I would never have stolen her purse. 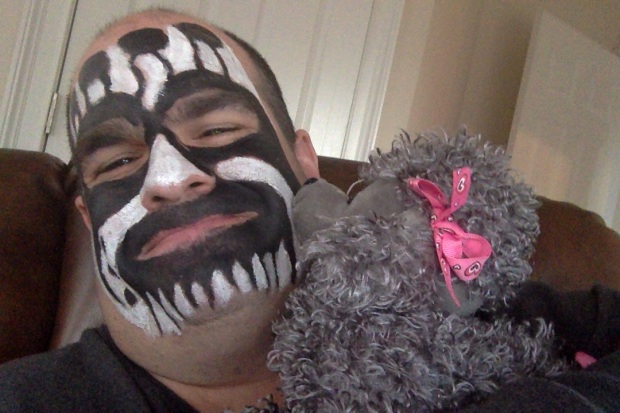 There were really only a few noteworthy encounters. One person started singing “Rock and Roll All Night” when they saw me. I was unamused. Being mistaken for Gene Simmons under any circumstances is offensive to me, but the metal purist in me wanted to throttle the person. Another person asked me if I had any Faygo. You can imagine the horror I felt. My co-workers were relatively amused, but it was laughed at and quickly forgotten as the business of life ground on.

There are these Pro-Life protestors that I regularly see on the drive home with signs that read things like “It’s A Baby, Not A Choice” and “I Survived The American Holocaust” camped in front of the local Planned Parenthood. I had an elaborate scheme planned in which I leaped out of my car and began screeching the lyrics to “Abigail”. Unfortunately, they were not there and my rather uneventful day as The King slogged on.

I kept casting glances out of my car window at people who I intended to frighten. No one seemed particularly impressed or even remotely affected. A minivan cut me off in traffic. I drove up right next to the car and gave the driver an angry look. He cast a brief eye in my direction then went back to text messaging someone about whatever urgent thought had just occurred to him.

I assumed that my stop to get gasoline would be the highlight of the day. Someone would have to find this at least a bit out of the ordinary. Again, disappointment. I stood behind my car pumping gas. People walked by. Some looked, some didn’t. No response.

I went inside to the cash register. The person whose named tag announced him to be “Tim” looked took my 20-dollar bill and gave me change. Nothing. Was this an ordinary occurrence at gas stations throughout the American South? Was this odd attempt to garner attention not particularly interesting or funny? Was I misreading the body language of the people around me? Were people simply so locked into the everyday drudgery of their lives that a 6 foot 2 man in heavy metal makeup could not even awaken them from their daily slumber? I wasn’t sure.

I slumped back into my car and drove home. My wife and children found the whole thing pretty funny, but considering I regularly run around the house with a pair of pants on my head or singing Soviet Era march anthems, it didn’t really strike anyone as being out of the ordinary. We took some pictures and went back to our usual routines.

Life seems to march on unmoved by the bizarre actions of myself or anyone else. When something truly out of the ordinary occurs they might ponder it. For a moment. Sometimes.

Life has an energy of it’s own. It flows in 7 billion directions all at once. Everyone in their own lanes. Everyone going somewhere. Doing something. Thinking. Breathing. Talking. Texting. Chewing. It all just goes on and on. Day after day. Night after night. There is no universal theory to explain it. It’s just one event after another. An endless parade of sights and sounds.

What is the importance of one man wearing King Diamond makeup in this sea of human impulse and action? Very little. Throughout the entire day, I felt this odd pressure to be noticed. As if it was critical that someone see me, see what I had done. To laugh. To be altered from their course.

At first, I was kind of bothered that no one really seemed to notice. After all, what was the point beyond seeing the shocked expression on a few faces? As time went on, I just wanted to get the makeup off. I was tired of showing off. Tired of playing a part. Exhausted by trying to be noticed.

At the end of the day, I felt a genuine sense of relief to take the makeup off. I’ve always felt it important to stand out as an individual. I’m narcissistic enough to have spent four years writing random thoughts and ideas on this website and hoping desperately that people will want to tune into my world enough to read it. I enjoy the thrill of being noticed.  Until yesterday, I had never realized how tiring searching for it can be.

The best part of the day for me was when I sat alone in the deadening quiet of my bedroom right before I fell asleep. No one was watching me. No one cared what I was doing or how I was doing it. Silence. For a fleeting moment, I felt the genuine peace of not being an individual, but simply being.

I sunk into life and disappeared. It was beautiful.

This entry was posted on December 17, 2014, 10:40 AM and is filed under Existential Rambings. You can follow any responses to this entry through RSS 2.0. You can leave a response, or trackback from your own site.