A Dish Best Not Served 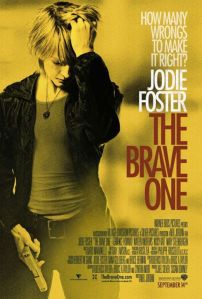 Jodie Foster Reacting to Her First Reading of the Script

It has taken nearly seven years for a film to eclipse Gus Van Sant’s trainwreck  “Elephant” as the reigning worst film of all time, but today, at approximately 4:33, I finished watching the Neil Jordan 2007 movie “The Brave One”.  All hail the new king!

For me to try to describe the plot of this film in a way that did it justice I would need to use start making gorilla noises and smacking myself in the face.  It is purile, infantile garbage.  Just so you as the reader fully understand my contempt for this vile bucket of swill, I plan on divulging every possible plot point that might surprise a person who has the misfortune of watching it.  Hopefully, this will discourage anyone who has not taken my warning seriously from seeing this monstrosity.

Jodie Foster plays the preposterously annoying Erica Cain, a public radio “personality” who rattles on and on about her love of New York City and all of its whimsical, gritty charm.  Erica and her boyfriend go out to walk their dog and get brutally beaten, he dies and she quickly morphs from Garrison Keillor to Charles Bronson.  A Bernhard Goetz for the Starbucks set.  Erica must just be unlucky because everywhere she goes some demented sociopath shows up and puts her life in jeopardy.  So, she does what every red blooded New Yorker should be doing (if you follow the deeply embarrassing moral logic of the film).  She busts a series of caps in the collective backsides of some of the worst human beings this side of America’s Most Wanted.

Don’t worry, she won’t actually be doing any jail time for killing more people than Charlie Starkweather because Detective Mercer (played with remarkable disinterest by the usually reliable Terrance Howard) is on the case.  There are a whole bunch of conversations where he pontificates about the difference between cops and vigilantes and then, in a plot twist that carries the film to new heights of absurdity, he helps her murder the perps who killed her boyfriend.  The best feat of acting in the film takes place when Howard comes full circle and tells Erica that if she kills someone she should “use a legal gun”.  See, because we thought he was going to arrest her, but, see, he doesn’t and instead he helps see justice done.  What’s great about that moment isn’t what he says or does, but that he manages to do it without bursting into fits of laughter.  I’d love to see one of those old outtake reels that they used to run under the credits of Burt Reynolds films but with Terrance Howard trying to get the dumb line about legal guns out and cracking up over and over again.  Better yet, I’d like to see what Dom DeLuise could have done with that line.

After that, Jodie Foster marches triumphantly through the tunnel where she was attacked and, I swear I’m not making this part up, the dog they were walking at the beginning of the film COMES BACK TO HER!!!!  Months have past since the attack!  WHAT?!?!?!  It still has the leash on for the love of God!  Was the dog just waiting there performing some canine version of Waiting for Godot, hoping Erica would reappear?  How did it survive?  I know there have been some budget cuts in New York, they still have at least one or two people working animal control…right?!?!

Neil Jordan has never impressed me all that much, except for that five second stretch of The Crying Game where America collectively spit its popcorn on the person in the seat in front of them.  This, however, is a new low.  He and the writers spend two hours arguing that Americans should stop leaving issues like crime to the police and simply gun down any of the menacing characters they bump into while trying to find their car after a Saturday night performance of Jersey Boys.

It is a highly irresponsible movie, but I don’t even think it’s worth spending a lot of time on why.  If you can identify with the moral language used in this film you are way past being reasoned with.  Trying to talk someone out of relating to the message in this film is like trying to convince someone who just watched Plan 9 From Outer Space that they should not be afraid of alien controlled zombies.

This entry was posted on March 26, 2011, 5:21 PM and is filed under Mr. Spillett's Academy Of Film Study For The Mentally Tormented. You can follow any responses to this entry through RSS 2.0. You can leave a response, or trackback from your own site.