Posted by Happy Metal Guy in General Weirdness on July 17, 2014 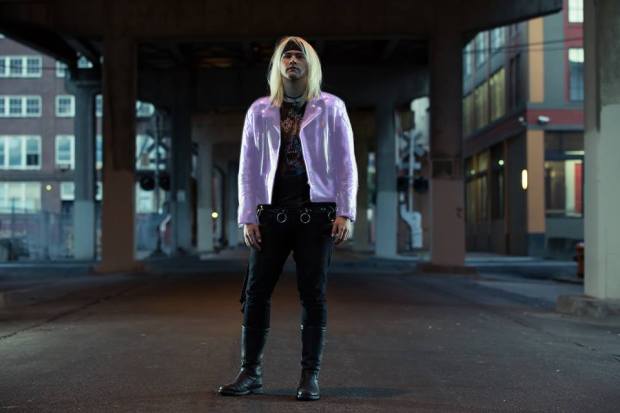 The Toxic Holocaust frontman cited black metal star Daniel Eriksson – frontman of militant demon rights group Watain – as an influence. “For many years, I have been a Watain fan. I scrutinized every detail of the band right down to the condition of the bassist’s hair ends,” said the blonde 32-year-old.

Initially surprised that Eriksson, a renowned goat farmer and pig vampire, is not using real leather, Grind confronted Eriksson after the show.

“I just grabbed Daniel by his bony shoulders and said, ‘Look man, I know your leather jackets are fake. How can you be so un-kvlt?’ And then Daniel looked me in the eye and said, ‘Boy, what makes you think black metal stars earn enough to buy real leather jackets?’ I was floored; it was the wisest thing I heard all my life.”

Since then, Grind only buys pure PVC leather jackets. He later joined PETA because he “might as well go all the way.”

Born and raised in Delaware, Grind started listening to hardcore punk and thrash metal to escape his agricultural reality and repel farm girls. Now based in Oregon, the newly minted PETA supporter plans to spend more time raising awareness about the merits of PVC leather jackets. To appeal to minority groups, his first major project will involve playing the next 666 Toxic Holocaust concerts clad in jackets of color. Reportedly, Grind will alternate between the seven rainbow colors.

According to PETA spokesman Gaahl Goroth, Grind will soon begin a Twitter campaign aimed at converting leather-wearing metal musicians to PVC supporters, too. Pictures of Grind wearing nothing but his PVC jackets while lying down in suggestive positions will be circulated and made viral through hashtags such as #SayYesToFalseLeather, #JamesHetfield and #TweetMeLikeOneOfYourFrenchGirls.

Furthermore, Grind has announced that he will picket the release of Pokemon Alpha Sapphire and Omega Ruby this November at Nintendo’s flagship store in New York City. Members of animal rights groups Earth Crisis, Cattle Decapitation, Heaven Shall Burn and Vegan Reich are expected to join him.