Posted by Happy Metal Guy in HEAVY METAL MUST BE DESTROYED on September 5, 2016 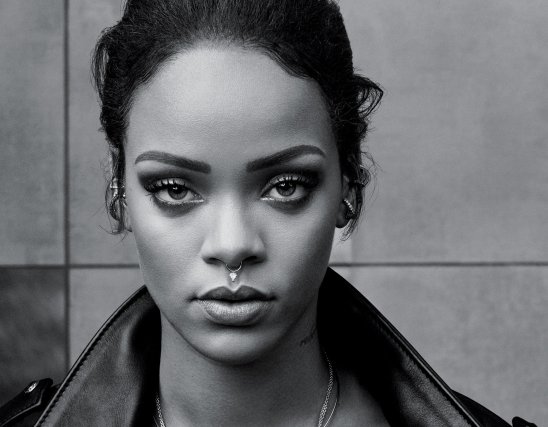 It was a publicity stunt after all.

The unveiling of pop megastar Rihanna’s notorious death-metal-styled logos at the 2016 MTV Video Music Awards (VMA 2016) was part of a marketing campaign by her new record label Unique Leader Records, according to a press release yesterday.

Reportedly, the aforementioned publicity stunt was just the first of a dozen promotional efforts.

Rihanna could not be reached for comment on the nature of the remaining 11 stunts. But the 28-year-old tweeted earlier today that she was pushing priests down stairways, and doing blackout poetry with murder stories from newspapers in public libraries at Fairfax County, Virginia over Labor Day Weekend.

Sources close to Rihanna confirmed that the Barbadian puppet of capitalism inked a three-record deal with Unique Leader Records, an American death metal powerhouse, sometime in mid-August. But out of fear of assassination attempts by death metal zealots at the VMA 2016, all involved parties kept the record deal under wraps as much as possible.

“I am excited to work with my greatest cardinal sin, Rihanna,” said Erik Lindmark, CEO of Unique Leader Records, in yesterday’s press release. “Long have I dreamt of working with pop music’s boldest punk chick. She had a brush with death, has an amazing voice, has a unique lyrical style, has plenty of attitude, and has… uh… great assets. There is nothing about her from head to toe that I do not like.”

Rihanna’s first full-length release via Unique Leader Records will be a tech-death reissue of her classic album from 2007, Good Girl Gone Bad (source of the immensely popular single, “Umbrella”). It is tentatively due in December.

Members of Gorod, Rings of Saturn, and Soreption have been roped in as session musicians. Jason Suecof (Atheist, The Black Dahlia Murder, Cryptopsy, Job for a Cowboy) will produce, mix, and master the record at Audiohammer Studios in Sanford, Florida.

Legendary artist Dan Seagrave has also been hired. He will give the original cover of Good Girl Gone Bad a death metal makeover “along the lines of Left Hand Path.”

In commemoration of her record deal with Unique Leader Records, Rihanna will release her first death metal single, “Knuckle Smashed Face”, in cassette and vinyl formats this October. At press time, the single’s punchy lyrics were already leaked and making rounds on social media, garnering fistfuls of attention.

Rihanna, born Robyn Rihanna Fenty, first broke into the music industry by working as a ghost songwriter for cult devil metallers Nunslaughter in the early 2000s. Shortly after her work on the satanic group’s 2003 album, Goat, she auditioned for celebrated rapper Jay Z, then-president of Def Jam Recordings, and the rest is history.

Her last album, Anti-(Chris)t, was released in early 2016 via Century Media and Peaceville Records. It was certified double platinum by the Recording Industry Association of America (RIAA) on May 5, becoming the first multi-platinum album of 2016.