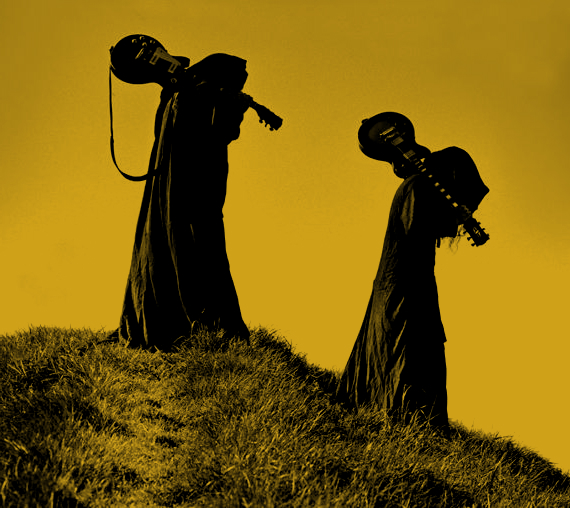 The ‘O’ in Sunn O))) is silent, and so is the exalted fridgecore purveyors’ new album. News of this monumental artistic endeavor broke today on the Seattle natives’ Ello page in the form of a scrambled animated GIF image, which remained cryptic until a fan promptly unscrambled it using a World War II-era German military Enigma machine.

Titled 50′ 00″, the latest studio offering from extreme music’s most polarizing duo was recorded on phonautogram in North Korea’s central library. It was produced by renowned experimental decomposer John Cage, and mixed by acclaimed washing machine technician Merzbow at an abandoned love hotel with good architectural acoustics in Saitama, Japan.

According to Sunn O))) guitarist Stephen O’Malley, only 433 copies of 50′ 00″ have been printed, and they will be randomly scattered throughout the Deep Web beginning sometime in winter. Black market forces will determine the price of each copy.

“We have pushed the envelope again. This time, we have redefined extreme metal—no, art as we know it,” said O’Malley. “What could be more avant-garde than giving a recording medium back its true voice?”

He continued: “Hold any record up to your ears, and you will hear nothing but stony silence—nothing surprising about this; it is merely natural. But for decades, millions of misguided ‘musicians’ have been stuffing records full of music after gleefully taking their silence to imply consent. That is utterly unethical. 50′ 00″ will free records from the bondage of musical structuralism, and be looked back on as a masterpiece that started a new movement championing the inalienable right of recordkind to remain silent.”

Containing just one track that shares the album title, 50′ 00″ clocks in at exactly 50 minutes. To combat sloppy piracy and foster respect for artistic intentions, each copy of the album was made with patented IMF technology; any playback of 50′ 00″ that exceeds or falls short of 50 minutes by a nanosecond will trigger a self-destruction sequence with a countdown timer counting down from the square root of one’s current Body Mass Index (BMI), rounded to the nearest whole number.

In response to the overarching concern of audiophilic fans, O’Malley promised that 50′ 00″ is not part of the Loudness War. It was “mastered like a classical music record” and has the dynamic range of “something like Colored Sands.”

Early reactions to 50′ 00″ are already trickling in, and they are generally positive. Napalm Death vocalist Mark “Barney” Greenway called the album “brilliant” and lamented that it was something his band “should have done in 2005.” Annie Cougar of Better Homes and Gardens gave the album five hoes out of five, praising it for being “more accessible than the quietness of an empty home.”

To promote 50′ 00″, Sunn O))) will tour libraries throughout North America this Christmas season with supporting acts the American Association of Mute Ventriloquists (AAMV), Literacy for Incarcerated Teens (LIT), and Memorex.

Members of the public are welcome to partake in an exclusive sneak preview of 50′ 00″ tomorrow at the “Zoroastrian Pottery” section of an undisclosed second-hand bookstore somewhere in Southern Missouri.

This entry was posted on June 25, 2016, 1:14 PM and is filed under General Weirdness, UnMusic. You can follow any responses to this entry through RSS 2.0. You can leave a response, or trackback from your own site.