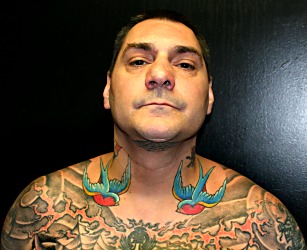 Vinnie Stigma has been many things in his long and intriguing life.  The enigmatic guitar player from Agnostic Front has been an actor in the hit film New York Blood, a professional stunt car driver and even the Secretary of Agriculture in the state of Oklahoma for a short time in the 90s.  However, few people expected his recent career change.  Stigma has become a renowned children’s author.

“You know, I was thinkin’ about how stupid kids are today with all of the hugging and sharing nonsense they get in the schools.  I want to rap them upside the head with a newspaper and say ‘What’s a matter with you?’  So, I wrote this book to help them not be so freakin’ dumb.  Teach’em some stuff that could make them so they don’t get their skulls smashed in everyday and whatnot,” said Stigma on the steps of his Brooklyn townhouse.

The book, which is the story of five streetwise but cuddly rabbits from Coney Island, takes place on the seedy streets of New York after dark.  The rabbits are drawn to a convention of animals that takes place in the Bronx where they discuss a truce between all the other animals in the city.  However, after the wise fox named Cyrus who called the meeting is gunned down, the Rabbits are pursued by the other animals who believe they killed him.

Most of the story centers on their journey back to Coney Island and their battles with rival groups of animals for survival.  The climax of the book is an all out fight between the rabbits and the rats out on Coney Island Beach. Reviewers are already excited about the book, comparing his work to early Dr. Seuss and Shel Silverstein.

“Stigma has written a beautiful parable for the ages,” remarked noted New York Times critic Dwight Garner, “he captures all of the magic and beauty that children experience when hitting another child in the head with a tire iron for the first time.”

James Wood, book reviewer for The New Yorker, was even more effusive in his praise.

“Young people today are just too soft,” wrote Wood, “this book teaches them important life skills like how to hotwire a car and how to make a Molotov cocktail.  Things that our liberalized school systems have omitted from their curriculums in the name of political correctness.”

“I Thought You Were My Friend” is intended for children 3 to 7 and includes pop-up police snakes along with scratch and sniff sewers and subway cars.  However, Stigma believes the book will resonate with everyone, from toddlers to adults.

“Wanting to beat and maim someone because they are in your way is a simple human characteristic,” said Stigma. “If adults don’t read this book, fine.  I’ll go to their house, put my knee into their chest and read it to them.  People need to understand that this book has an important and timeless message and if I have to give a beating to every single American to get the message across, that’s what I’m going to do.”

This entry was posted on April 4, 2012, 2:04 PM and is filed under General Weirdness. You can follow any responses to this entry through RSS 2.0. You can leave a response, or trackback from your own site.