GOP Frontrunner Perry: “King Diamond is Too Moderate For America”

Too Moderate For America???

In the hopes of stemming the growing tide of voters supporting King Diamond for President, Republican frontrunner Rick Perry lashed out at The King’s campaign which he claimed is “well outside of the mainstream in American politics.”  In a speech given by Perry at the home of noted abortion clinic bomber Jack Marcus, Perry went on a full scale five minute offensive against Diamond in an attempt to show that he does not represent the values of today’s Republican Party.  “Where are the irresponsible proposals for tax cuts for the wealthy?  Where are the preposterous accusations of President Obama’s link to The Communist Party?  Where are the crazed threats of violence against Third World Countries?  Do you realize King Diamond has been on the campaign trail for less than three weeks and he has yet to accuse an Islamic charity group with having ties to Al-Qaeda?  I had been in the race less than a week when I threatened to beat up the Head of The Federal Reserve Board!  King Diamond is clearly too moderate for the Republican Party and definitely too moderate for America,” shouted a wild-eyed Perry in front of 200 cheering, drooling Perry for President staffers. 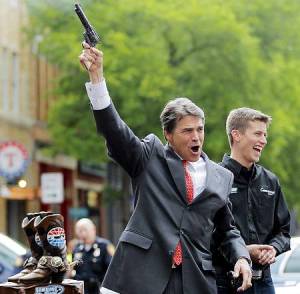 Perry is not the only candidate who has attacked King Diamond in recent days.  Former Massachusetts Governor Mitt Romney hammered The King for “sounding like a girl when he sings”.  Romney went on to accuse King Diamond of plagiarizing the entire Abigail album, which Romney claims he himself wrote in his Geometry notebook while a high school student in the 1960s.  Romney even went so far as to question The King’s metal credentials.  “I’m much more of a metalhead than King Diamond,” exclaimed Romney in front of the only guy who came to see his speech last night in Des Moines, “I have every Venom album on vinyl, while King Diamond only has them all on CD.  I ask you…Who is more metal?  Me or The So-Called King.”

Michelle Bachmann chimed in yesterday claiming “King Diamond is God’s punishment on America for the sin of collecting taxes.” Ron Paul accused The King of “actually being a secret agent of The Lizard People and The Cult of The Illuminati.”  Some guy named Jon Huntsman who claimed to be a Republican Presidential candidate also said some nasty stuff about King Diamond, but no one in the press bothered to write it down or record it.

Much of this negative campaigning reflects a belief that the Republicans have a chance to win the election in November if they can just turn the American public into a frightened mass of well-armed lunatics.  This strategy has worked well so far against President Barack Obama.  In a recent CNN/Gallup Poll, 65 percent of Americans claimed they would “vote for a seal who knew how to balance a ball on its nose before they’d reelect Obama”.  In a Rasmussen Poll taken last week, it was revealed that 82 percent of Republicans feared that if they voted for Obama a plague would immediately descend upon the land and rabid dogs would eat their children.  However, in both polls however, Obama still leads Perry by around 4 percent.

King Diamond has remained silent so far about the attacks although he has mentioned to several sources inside his campaign that “he looks forward to playing beach volleyball with Michelle Bachmann’s head”.  He also joked with a reporter about Rick Perry’s intense persona saying “everybody’s a tough guy when they have Secret Service protection.  He wouldn’t last 5 seconds in The Pit.  He couldn’t beat up my grandmother.”  The King has a tough week of campaigning ahead, including a major, make-or-break policy speech in front of the influential “Satanists For Christ” National Convention in Davenport this Friday.  His ability to attract evangelical voters is seen as the key to him winning the all-important Iowa caucus in January.

This entry was posted on August 30, 2011, 3:16 PM and is filed under King Diamond For President in 2012. You can follow any responses to this entry through RSS 2.0. You can leave a response, or trackback from your own site.